Renfrewshire Foodies decamp to one of Paisley’s hidden gems for some exquisite Indian cuisine.

Firstly, Multan Tandoori isn’t somewhere you happen to fall into. Although not far from the main thoroughfare of Paisley and easily walkable from Gilmour Street station, you really need to be clued up to come here. You’ll find it safely hidden on George Street, illuminated by a huge white and red sign.

Multan’s regulars are clearly in the know, though. A warm and welcoming reception awaited us from David, the restaurant’s owner, alongside one of his daughters who works front-of-house after school. We can see why people come time and time again.

Its homely charm comes from a simplistic interior that reminds you of a traditional Scottish Indian family-owned restaurant – no airs and graces, just great, wholesome food from an expansive menu. We soon learned that many of its repeat visitors have their own personalised curry and they’re not afraid to call up and order it.

The restaurant has been open since 1988, remaining in the same family and being passed down through generations, its current owner, David, took over in 2007 and has overseen the business as it’s racked up numerous awards.

From the South West of Scotland’s Curry Restaurant of the Year at the Annual Curry Awards to the Best Indian Restaurant in Renfrewshire from ThreeBestRated.co.uk, they’ve got plenty of accolades to their name.

Our evening kicked off with some papadums served with a selection of chutneys. We enjoyed these over a conversation with the proprietors and it was fascinating to learn about the restaurant’s heritage and how they’ve adapted during a challenging year; namely offering a bigger takeaway and collection service to locals.

The restaurant delivers across Paisley, Linwood and Barrhead during the week and Paisley-only at weekends due to demand for their food. David told us how his customers travel from all quadrants of Renfrewshire to visit. At time of writing, the restaurant remains closed to the public due to COVID-19, but the regulars are still coming along to collect their takeaways in their droves. 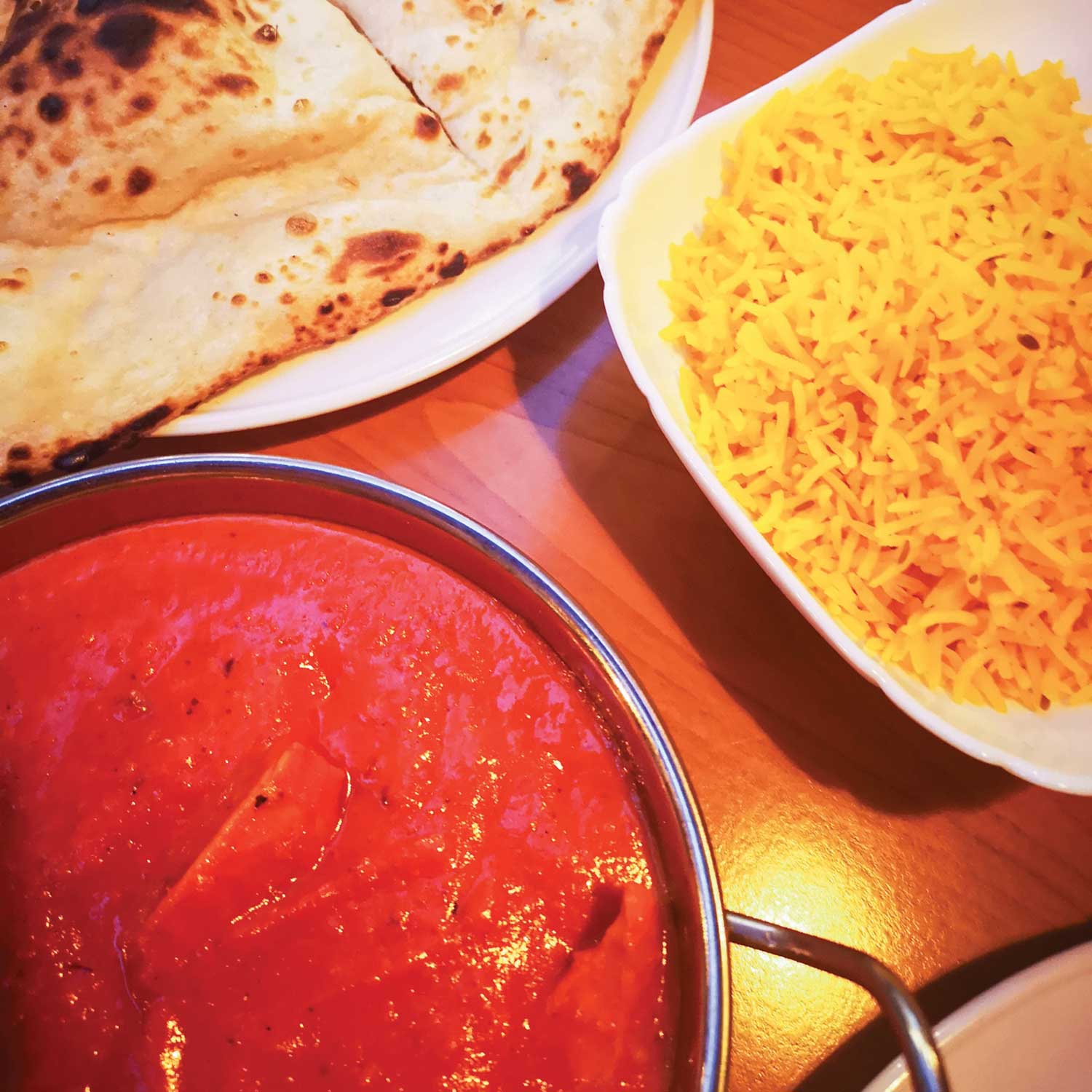 The portions were very generous and accentuated the homeliness that we enjoyed so much. We started off with fish pakora, which was light and fluffy and served with a side salad. The fish flaked away in your mouth and was utterly delicious.

Vegetarians and vegans are also well catered for, with the staff eager to adapt menu items to suit any dietary needs. We also tried the vegetable samosas as an alternative starter. We could have eaten them all, but given curries were inbound, chose to restrain ourselves!

We tried a chicken and a vegetarian dish as our main courses, going for one of the house specials, the chicken balti butter masala, served in a ginger, garlic, almondy, buttery and creamy sauce.

Our waitress described it as soul food and it absolutely was – the type of warmth you crave on a chilly October evening. The second dish, a tarka daal, was equally as delicious, with well-balanced spices and another plentiful serving to boot.

One rice dish and a plain naan to share was more than enough between two. Multan Tandoori don’t scrimp on quantity (or quality) and the offer is there to take your leftovers home for the next day, should you wish.

The Multan Tandoori’s appeal is unique– it’s a Paisley institution where your parents probably went and took you as a child so now, imbued with a sense of nostalgia, you return yourself as an adult. Yet as newcomers, we felt more than welcomed on the night we went along and we’d unquestionably return.

If you’re looking for a modern, glamorous Indian restaurant, it’s probably not for you. But, if you’re in search of delicious food or a cosy and unpretentious place to meet friends and leave with your stomach and your heart full, Multan Tandoori will hit the spot.

In the biggest endorsement of all, we’ve since learned that Renfrewshire Foodie Emma sent her husband back to Paisley three days after their visit for the customary weekend takeaway. His destination? None other than Multan Tandoori.