Sometimes, a piece of art comes along that seems to unconsciously tap into the cultural temperature of the times and with her second book, Edinburgh-born, Lochwinnoch-based author Kirstin Innes has accomplished exactly that.

But for all that her latest novel presented a layered, often deeply unjust world in which people have seen aspects of both society and their own live seen in both beautiful and aggravating fashion, Kirstin still can’t quite believe the reception that the novel has received since its publication in July of 2020. In fact, she’s only now beginning to feel comfortable with admitting that it is her profession.


“It’s been bloomin’ lovely, actually,” Kirstin Innes earnestly declared. “My whole experience of the book had all been over a screen but now, I keep leaving Renfrewshire to get out to bookshops for signings!

“It took me a while to even kind of admit it,” she said of making the transition from the world of arts press into becoming an author. “I was 28 when I won the Scottish Book Trust’s New Writers Award and I hadn’t really shown anyone my writing up to that point apart from one friend.

“It took me a very long time to actually tell people that I was a writer, I think the second novel was out and had been well received before I could and I still have a quibble when a taxi driver asks me what I do. I think we’ve all got this internalised image of what a writer is and it’s like a great big tall guy from England (laughs).” 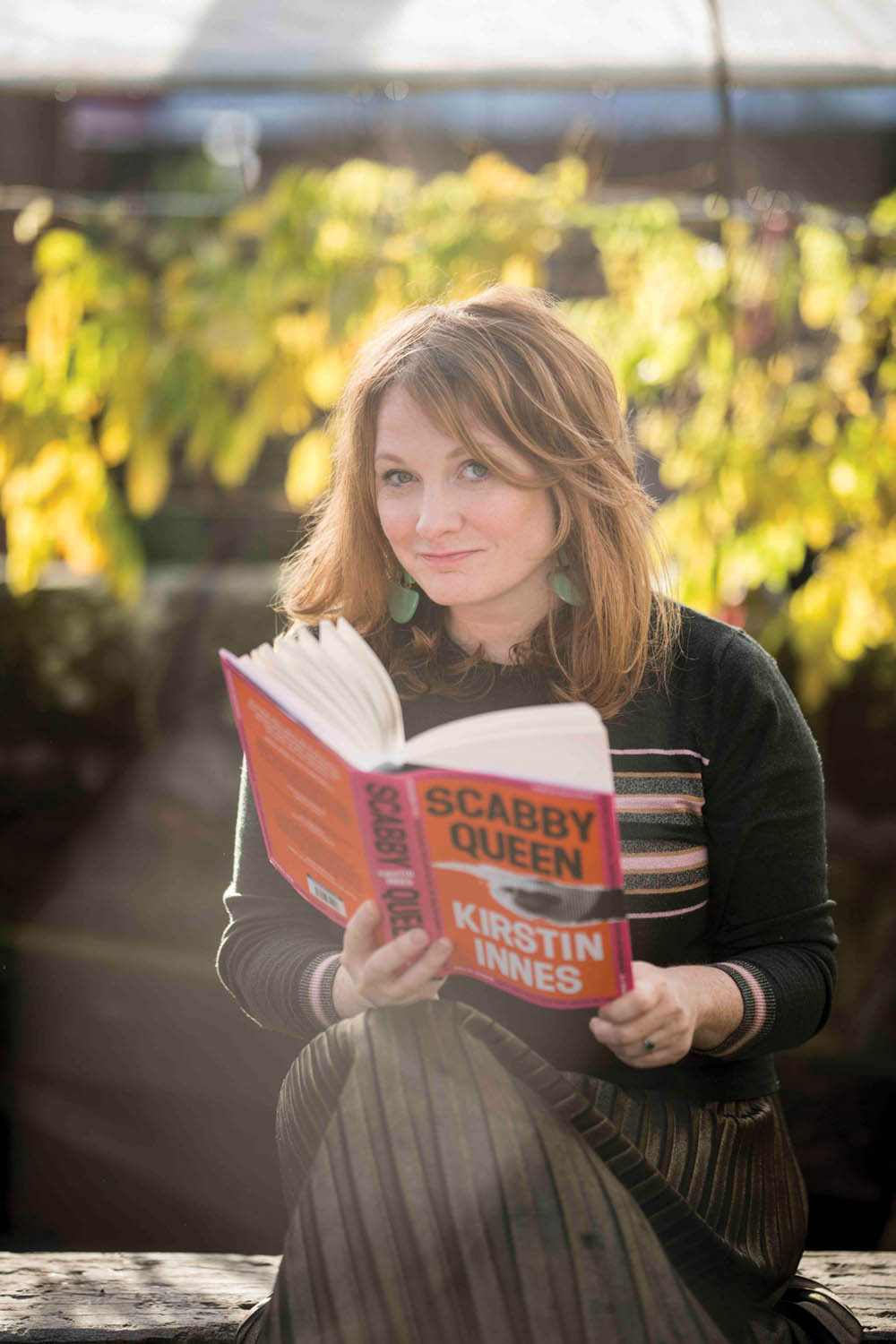 Now viewed as part of a new swathe of contemporary Scottish writers who have turned in revelatory and life-affirming bodies of work in recent years, Kirstin’s multi-faceted account of the life of Clio Campbell has struck a chord with readers far and wide.

Having accrued inspiration for its central character, a protest singer and political activist whose life had often been marginalised down to a hit single that was released when she was just 19 –  from real-life figures such as Sinead O’Connor and the late Carrie Fisher, Scabby Queen has been lauded for its decision to enlist a whole host of different narrators.

As in doing so, the book presents the late Clio’s story from within a rich tapestry of perspectives that traverses across boundaries of race, gender, sexuality and socio-economic background.

But to Kirstin’s mind, this wasn’t a conscious decision and actually happened organically.

“I didn’t have the luxury of writer’s block with it,” Kirstin said of the follow-up to 2015’s Fishnet. “I started writing Scabby Queen at the time that I finally got pregnant after five years of IVF. I had a baby, then a toddler and another pregnancy and it was finished two weeks before the second baby was born. I was a machine (laughs), the manuscript was actually 30,000 words longer than it ended up being.

“I didn’t realise the scope that it would have. It’s been tagged as ‘a state of the nation’ novel and that didn’t enter my mind at all at the time. However, it was always going to be told from the points of view of the people who were left behind after this force of a woman had died.

“I was thinking about how no-one knows the complete truth about somebody else. I kept coming back to this thing from school when a policeman came in and told my class that if you’re taking witness statements, five different people witnessing the same thing will give you different accounts as it’s all filtered through their heads.

“It was always going to be about the treatment of women in left-wing politics,” Kirstin continues. “A lot of it was inspired by an activism burnout after campaigning for Yes in 2014 and then seeing Brexit and Trump happen. I was feeling pretty low and I just kind of shut myself away from the world.

“My partner [fellow writer and Mill alumni Alan Bissett] would say that he needed to talk to me about all this stuff and I was just like ‘nah, I’ve got the blinkers on’. Then, when he read the book, he realised that’s where it was all going.  Things like the ‘Me Too’ movement definitely seeped in too, you can see the influences of the times on that book.”

“The way we discuss things has become so polarised,” Kirstin affirmed. “So, I thought having as many viewpoints as possible would give a more nuanced view of the world.”

When a novel resonates as profoundly as Scabby Queen, there is often an expectation that it will be translated into other mediums. While she was understandably tightlipped on the details, Kirstin was delighted that Scabby Queen was promptly receiving the same treatment.

“We’ve now finally got a script-writer in place for the TV adaptation – that’s all I’m allowed to say at the moment! – but that’s all in progress. While that was happening, there was theatrical interest too.”

After leading with the philosophy that “any place” she visited in the years leading up to the novel’s creation would find its way into Scabby Queen, it’s no surprise that her home base of Renfrewshire actively infiltrated the pages with not only a trip to the RAH, but an introductory period which is spent in a cottage in Kilbarchan.

Now that she’s not only written her second novel in Lochwinnoch, but remotely co-authored her ‘lockdown project’ of Brickwork: A Biography of the Arches with David Bratchpiece in the area, Kirstin seems all too aware of the value that its tranquil atmosphere and headscape provides her with.

“My partner would be brought in by local councils – Argyll & Bute, Renfrewshire – to be a school tutor and I’d sometimes come with him,” she said of their decision to move to one of Renfrewshire’s most famed beauty spots.

“By the time that we’d get back to the city, we would feel a little more hemmed in. So, we moved out here where we could access a great big expanse of water and sky within five minutes.

“I did most of the groundwork for this novel and now, my third, which will be set in a small village community, when I was walking with the baby in a sling in the Clyde Muirshiel woods,” she revealed. “ I’ve kept doing that same thing – just without the post natal depression or baby (laughs) – and just taking notes on my phone.”

“I’m in the early stages of it,” Kirstin cautioned, “but it’s quite exciting to have a new project and see it all begin again. I finished writing Scabby Queen in 2018, so it’s felt like a long time coming!”

Favourite place for coffee? Cucina Minucci at The Junction because David always puts an extra shot in my Americano when I come in knackered off the school run

What book are you currently reading? I have an advance copy of Young Mungo, Douglas Stuart’s follow-up to Shuggie Bain

What book should everyone read? The Trick Is To Keep Breathing by Janice Galloway

Scabby Queen is now available via Fourth Estate, while Brickwork: A Biography Of The Arches, comes courtesy of Salamander Street. Keep up with Kirstin Innes on Twitter @kirstininnes.