Fresh and sumptuous Asian cuisine is the order of the day at a cosy hidden gem in Paisley. Paul Dickson dives in.

The eating and drinking scene in Paisley has, over the last few years, experienced an upsurge in quality cafes, restaurants and bars. A case in point being Japan Street Food, a restaurant that’s earned nearly five stars from 191 reviews (and counting) on TripAdvisor. I had to find out why.

My dining partner was friend and neighbour Alan, who took the photos in the previous issue of the food at Elderslie’s Butchers Steak & Grill. He confessed that it was one of the hardest jobs he’d ever done; trying not to eat the meals in front of him was a challenge. I thought I’d make it up to him by providing a dinner he could actually eat this time. 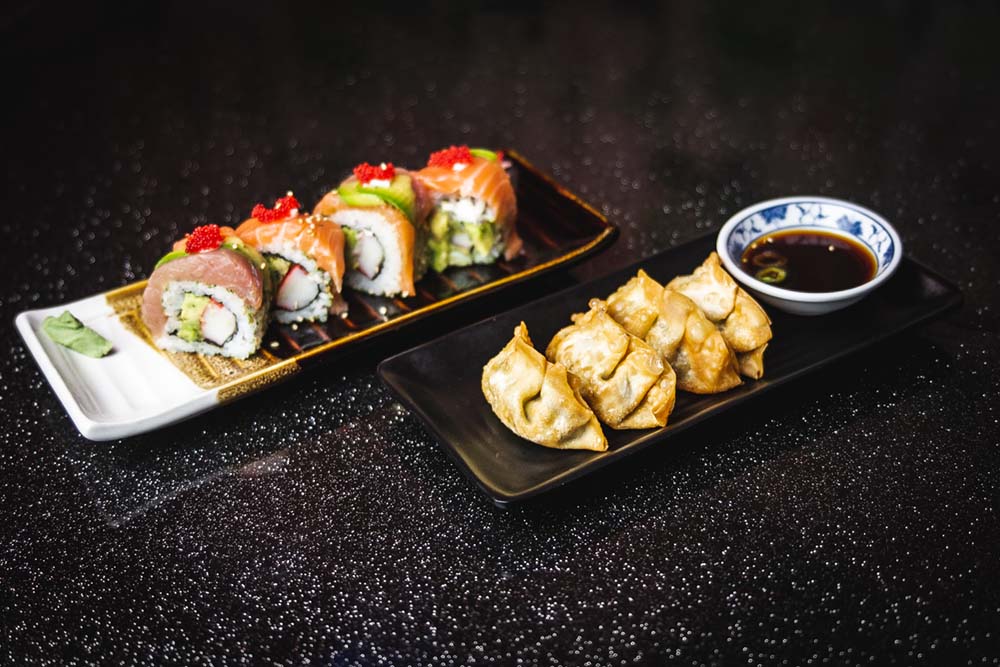 The restaurant opened in April 2017. It’s small and cosy, with space for ten covers. Due to its popularity they’re planning on expanding their dining area soon. In the meantime, do book your table in advance. Our host was friendly and knowledgeable and kept us entertained with some comical anecdotes. We were sat nearest to where the chef was preparing the food, which was making us hungry.

To start we both ordered gyoza dumplings: thin dough wrapping filled with vegetables or minced meat, fried until crispy. Alan opted for pork while I picked the vegetable dumplings (both £4.20 for four pieces). This delicious appetiser was crisp on the outside with a soft filling, and when dipped in the gyoza sauce provided a nice bit of heat on a chilly night.

Following this, Alan chose the chicken katsu curry: fried breaded chicken served with rice or noodles and Japanese curry sauce (£8.50). Alan gave this top marks. Meanwhile, I tucked into a plate of rainbow rolls: crab stick, avocado, cucumber and Japanese mayo topped with salmon, tuna, prawn and seabass (£11.95). As a fan of a popular Japanese restaurant chain (which shall remain nameless), I was surprised at how much fresher, tastier and better the food here was.

The final dish is Japan Street Food’s showpiece. The dragon roll consisted of prawn, soft shell crab tempura, cucumber and cream cheese topped with avocado, Japanese mayo, Teriyaki sauce, sesame seeds and crunchy Tenkatsu flakes (£12.50). This was just as delicious as the rolls that preceded, but the addition of the crispy crab tempura throughout gave it a light crunchy texture which was unlike any sushi I had tried before. This was a favourite for both of us.

Happily sated, our host asked if we would like some sake – a Japanese rice wine served warm in traditional small cups. I had to decline as I was driving. Sake is one of the few drinks that give me that warm, fuzzy feeling. The more you drink, the fuzzier it gets! Japan Street Food has four varieties in stock.

This restaurant is a hidden gem which combines delicious fresh food with excellent customer service. It might just be the best Japanese food you’ve ever tasted, and it’s available right here in Renfrewshire. I’ll be adding to the five star reviews.