Making Her Mark: The women’s heritage project that overcame lockdown

In the latest of a series of articles that spotlight the crucial and inspiring work of Renfrewshire’s own Kairos Women+, volunteer Arti Gosai reflects on Making Her Mark, a historical project that provided purpose, context and much more during a difficult time.

When I agreed to write this piece about the Making Her Mark (MHM) project, I thought it would be a straightforward piece, discussing women from the past and going into details about researching and biography writing. Never in my imagination would I have thought that I would find  such a degree of love, laughter, togetherness and resilience.

The MHM project was launched in December 2019 as a creative project that was intended to explore, reflect on and celebrate the lives of women across Renfrewshire’s towns and villages. MHM is an initiative brought together by Glasgow Women’s Library (GWL), Recovery Across Mental Health (RAMH) and Kairos Women+.

The project not only offered an exploration into how women+ are represented and remembered in the area, but opened up an opportunity for local women to use their own creative skills and hidden talents.

The project brought together women+ of different ages and backgrounds and included in-person workshops, day trips to local heritage centres and skills development training that intrigued both novices and experts in the area.

But alas! The project was hit hard by Covid-19 and came to a grinding halt alongside he rest of the world. However, between the tenacity of the workshop facilitator Lil Brookes, the enthusiasm of the participants and the help of the staff, the group was able to move online and help each other navigate technology that many were new to.

Not even the pandemic could stop these eager bunch of women+.

Lynda and Kate – who I interviewed together – spoke about their visit to Paisley’s Secret Museum.  During their excursion, they found exhibits focused on affluent  white men, but there was nothing on women unless it was one or two wealthier women. With this disparity in mind, their interest was piqued and it implored them to take part in the Making Her Mark project.

Lynda and Kate began by choosing the name of a Johnstone lassie – Mary Fletcher – to look up at the Heritage Centre at Anchor Mill. Speaking after the fact, heir eyes light up and their voices rise by a few octaves as they relay their journey with Mary Fletcher. Mary lived in the Abbey Poor house from her 20s in 1863 all the way through to her 80’s.

As Kate and Lynda’s search took them from record book to record book, they discovered two sisters – Margaret and Catherine – who had lost everything after their husbands had died.

The sisters then tramped from Renfrewshire to Falkirk, Dundee and back again for 13 years with no money to their names and only the clothes on their backs. They finally ended up in the poorhouse in April 1911.

I am met with another burst of excitement as Lynda and Kate tell me about finding that the sisters’ daughters were taken into care and sent to Canada, possibly as maids.

The cherry on the top was that they may have found the actual tenement building that Catherine and Margaret slept in (on the landing or ‘stairheid’).

It’s clear that Catherine, her family and their story has been woven deep into Kate and Lynda, to the extent that Kate has created a dialogue of a possible conversation that these two sisters could have had on the stairheid before going into the poorhouse.

Lil Brookes (facilitator) commented on this as follows: “Kate did a bit of creative writing. You took archives and made it into something creative. You’ve taken a bit of paper and given it life… That’s all because of  these two sisters. Their lives were terrible and they were sitting in an archive and nobody would have ever known about them, apart from Kate going: ‘oh right!’ And that’s where history can be very very powerful.”

Lil goes on to describe her experience of the project:

“It was difficult trying to discuss an exhibition and things like that while sitting on a screen. I started putting together niche presentations that were meant to provoke conversations and questions.

“That was the only way I could think of to get a response which was animated. What did it for me though, was the participants. They kept coming back and had questions for me.

“Even just chatting around the room, everybody saying hello to each other and what have you been doing, that really helped as well. To me, that was a big part of this project.

“It is something that should be celebrated within the exhibition itself, I think. The fact that yes, we did keep going and we weren’t going to give up, but we also kept to the task of ‘this is about women’s heritage’ as well.

“So, we were talking about women from the past but it was a bunch of women+ who are living through a pandemic who were delving into it. They were all very resilient women+ and we all kind of learnt from each other a little bit.

“If one of us was feeling a bit down, you pulled each other up by talking about women in the poor house or what women did in the past or what they (participants) were going to do. It showed a lot of strength of character between people.” 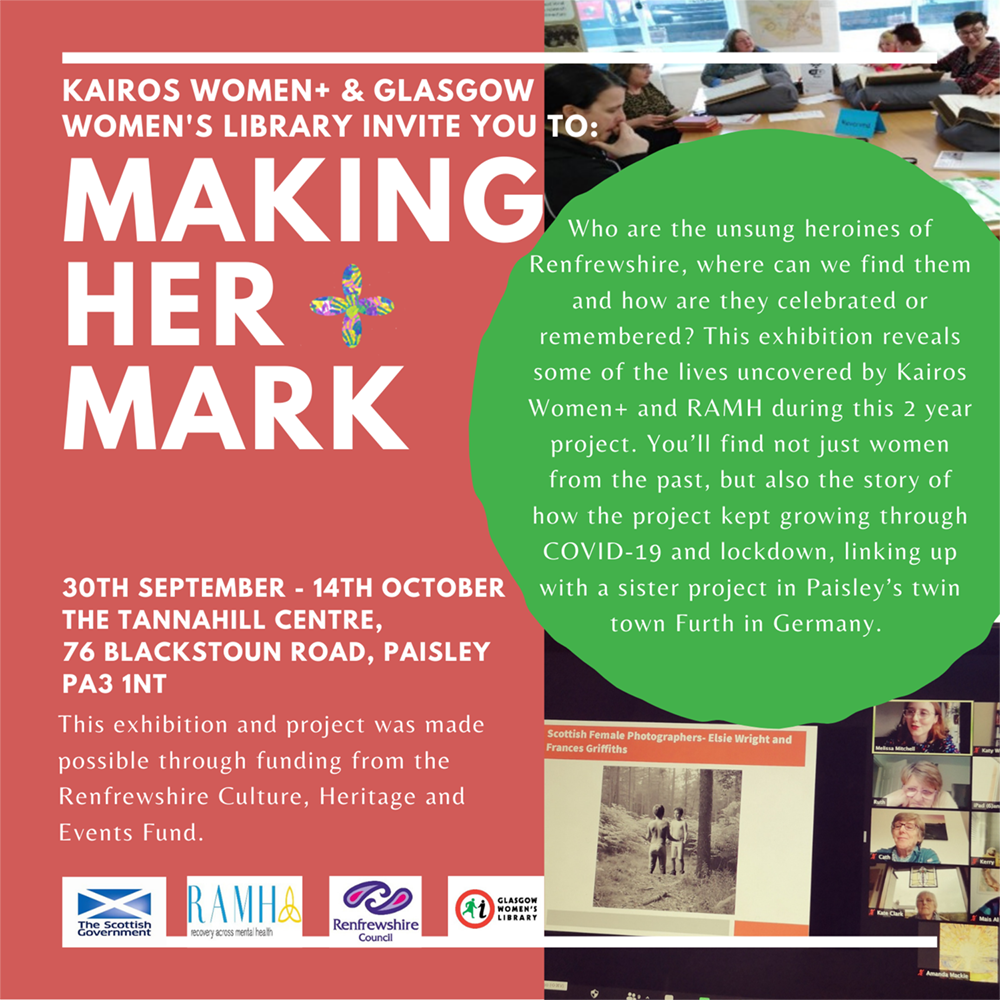 Ann, a 70-year-old fellow participant, had a very personal connection with the project in that it came into her life at a very stressful time where she was teetering towards a breaking point.

Ann cares for her younger brother that has bipolar disorder with severe anxiety. Coupled with the lockdown which further isolated her and having to deal with her brother sometimes disappearing for days, you would think that the last thing that would offer some solace or a ray of hope would be a women’s heritage research project.

Ann, who joined the group midway through the project, said that at first she didn’t understand what the project was about and what was going on with this focus on ‘Making Her Mark’. Ann explained: ‘I feel proud, I feel if it hadn’t been for the girls and the help and the friendliness, I would have given up.

I mean I kept on saying, what mark are we talking about? Am I disturbing this mark? I don’t know how many times I must have said, “Have I made the mark?” So, I really hadn’t a clue but maybe that’s quite good, a blank canvas that I could just start from scratch. I feel it’s my own wee baby.’

Ann sits across from me, doubtful of her education and the research work that she has done, but as I thumb through her notes, it’s clear that a lot of time, thought, love and effort went into her work. She elaborates that she initially started with the timeline and then worked into doing an ordinary day in the life of someone in the poor house. How many of us during the height of the pandemic would have given so much attention to someone from history?

As I draw things to a close, I leave you with a few statements from the participants.

Lynda: “Don’t look at things as they are, look into them to find out what they are, and you’ll maybe find something that’s interesting.”

Kate: “Why shouldn’t ordinary women be spoken about and why shouldn’t their stories live on? Their lives did matter because they influenced the people around them, their families, their neighbours and their communities.”

Lil: “The more women’s heritage gets down into the community, the more it will add power to understand what women went through in the past. To explain maybe what they go through today and potentially in the future. And that again is a powerful thing for history, it’s not just about the past, it’s about the future as well.”

Victory Baths in Renfrew to celebrate centenary with new exhibition