After obtaining registered charity status, Emmagayle Harper details how this community-led women’s space for all women and non-binary people across Renfrewshire and beyond is bringing people together in safe and inclusive ways.

When lockdown hit in March 2020, everyone was in a state of shock as the country abruptly came to an almost complete standstill with the exception of key services. Clubs, pubs, shops, schools, and colleges all closed their doors and everyone had to quickly adjust to the ‘new normal’ of working from home.

And for Kairos Women+, a Renfrewshire women’s charity-based in Johnstone, this was no exception. Kairos’ small but dedicated team of staff got to work in organising online Zoom events and activities for volunteers and members of the community to stay connected and engaged at a time when keeping in contact with others in the outside world was vital to maintaining positive mental health.

Staff and volunteers continued to reach out to the women+ of Renfrewshire by producing Creative Café videos and Kairos Kitchen cooking videos on social media and putting together community WhatsApp groups for volunteers and members of their Recovery Space to keep in touch and support one another through the increasingly tough times everyone was going through.

“I think for me, personally, it was quite difficult because I’m not very technically minded to laptops and Zooms and all that, so it was quite a learning curve for me.” Liz Cosh, Project Assistant, told me of the charities transition to online services over lockdown. And again, just really in the Kairos way if you like, it was a case of well, what do people want? And we’ll try this, and we’ll try that.

“Things did change, we had, like a drop-in and that worked for a wee while and then it seemed to not work, then we just amended things as we went along as to what was working for people and listened again to what the women and people wanted.

“I guess, we put out there what was needed”, she continued.

“And obviously, when it came to do the food parcels and stuff like that, that was another big thing because that is something that’s really needed in this pandemic time, but I think we all adapted really quite well to it.”

Liz originally found Kairos as a participant in 2018. After her husband John passed away the previous year, she began volunteering and was then offered a traineeship with Invest In Renfrewshire and took up her current position at the charity in September 2019.

Creative Café, a chatty informal arts and crafts group, and the Recovery Space, a supportive recovery space for women and non-binary people with addictions, are two groups Liz has spearheaded both prior to, during and after lockdown.

“Well, just the week of the lockdown–Monday the 16th of March– was the first day that we were having the Recovery Space for women with addictions and non-binary people. We had been out to all the different places and told everybody and given out wee cards and leaflets and flyers and everything and told everybody what was happening and then… lockdown hit”, she recalls.

“So, we managed to do a WhatsApp group as we’ve got six women in recovery at different stages and I support a few of them with one-to-one phone calls.

“That’s one of the main things I’m quite passionate about, obviously being in recovery myself. So, for two and a half years now, I’ve been sober and I know in myself how I felt about speaking with people that had lived experience. It’s different to speaking to somebody without lived experience.”

Kairos Women+ began its journey as an Active Communities project funded by The Robertson Trust to develop a community-led women’s space within Johnstone.

The project grew from strength to strength, eventually finding their own physical space in the community on Johnstone’s Quarry Street, hosting many different events, talks and creating groups to engage and support local women and non-binary people.

In April 2021, all that growth and hard work paid off in the form of Kairos Women+ officially becoming a registered Scottish charity.

As well as the dedicated staff at Kairos, the accompanying community is also made up of an amazing group of passionate and driven volunteers, participants and trustees who make the organisation feel less like a bunch of strangers and more like a family of like-minded individuals that are all striving to make change.

An attendee for over a year, Ruth heard about Kairos from a neighbour and started attending the Thursday drop ins in August 2019 and has been a pillar of the volunteer group ever since getting stuck into as many groups as she can.

“Before [Kairos] I was kind of turning my day into night and my night into day, I was in bed all day so it has definitely changed me. I’m not sleeping through the day as much.

“I went to the Kairos Café, the Creative Café, on a Tuesday afternoon  and the Thursday drop in, so that gave me a routine and then I became a volunteer in January 2020.” 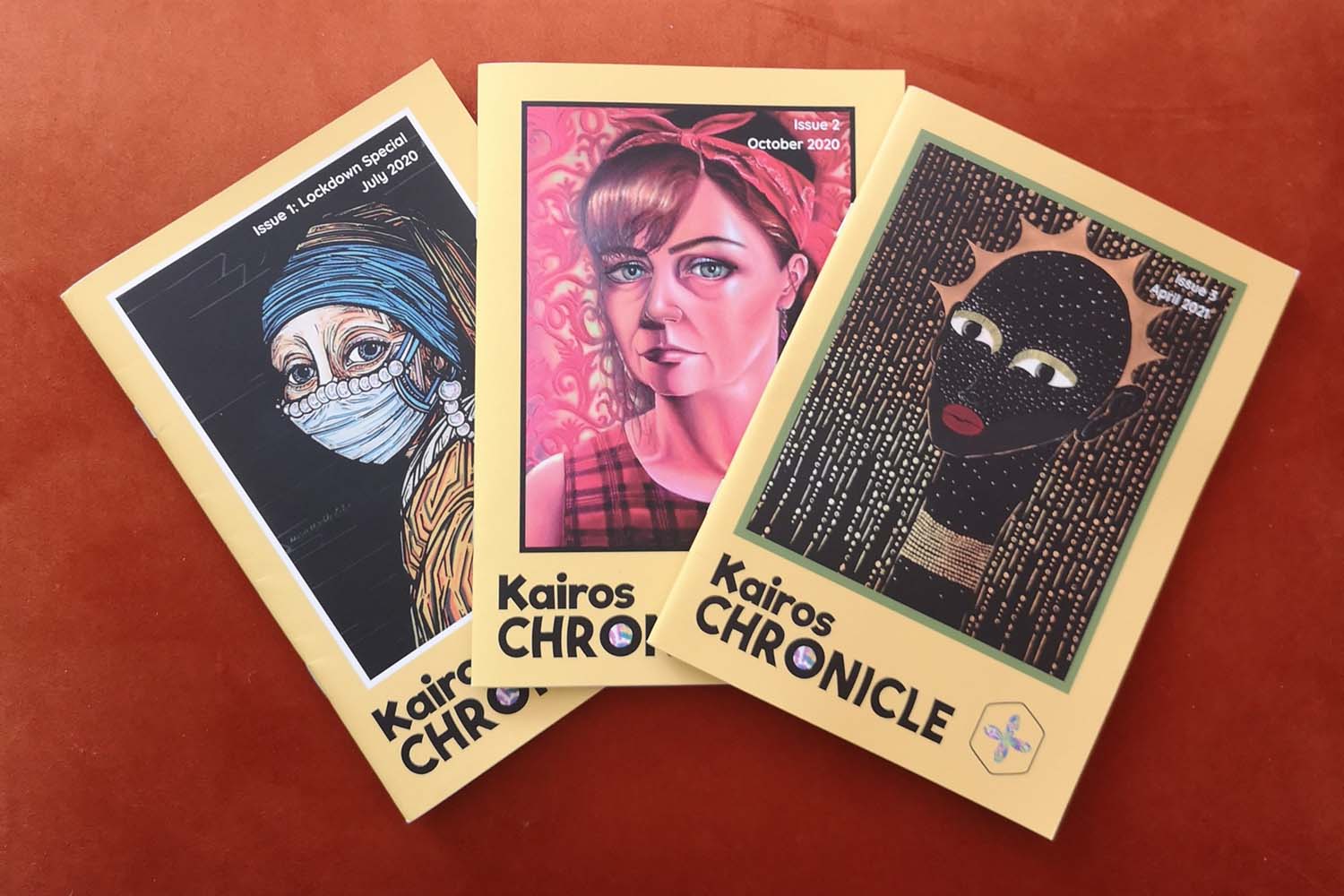 Kairos Chronicles’ resident agony aunt Ruth contributed to Kairos Kitchen during lockdown and has recently got involved with their newest project: a community cookbook.

“With the Kairos Kitchen, we got to send in videos or even just a recipe. Then, they [Kairos staff] created the WhatsApp groups and I’m a co-facilitator in the community one. That chat is actually quite a good thing, it sort of helped us to stay together.

“They’ve started making some more groups up online such as Making Her Mark and Kairos Museum and we’ve been doing a couple of others too. One was the Great Place project where we were doing biographies [of historical women] which was really, really interesting.”

Being part of Kairos’ big family has helped many staff, volunteers, and participants alike to grow in confidence and help the community, striving to campaign, fight and ensure women+ in Renfrewshire are equal and supported.

Jules, a volunteer and trustee, has said that they have been on quite an important journey of personal growth since joining Kairos.

“I first heard about Kairos through social media, back before they had opened up, I’d seen retweets of their surveys, they were trying to find out what folks in the local community would like out of the space.

Kairos gave me a place in the community where I felt like my input was genuinely, sincerely valued for the first time in a long time,and that I didn’t have to be frightened of any backlash for speaking about my passions or inequalities in society and how upset they make me. There’s still such bigotry around us all the time, and nobody laughs at me for talking about it.

“It’s astonishing what can achieve when you finally feel safe. It’s like it’s one of your basic needs to feel safe and it’s only once you have that safety within community that you can really start to flourish.”

Jules, who co-hosts the A Brew and a Blether podcast as well as being part of the zine, Paisley Museum and the Equalities Collective,says that since joining Kairos, their self-esteem has grown so much so that they feel it benefits others in their life.

“I regained a lot of confidence, I really started to feel like I could work towards getting back to being my old self, a self that I had kind of repressed out of fear, and a need for feeling safe for years.

“[Kairos is] a space where I could talk about any emotion, whether good or bad, happy, sad, angry, or whatever, and I would be listened to and respected. It’s much easier to then be able to hold that space for other people once it’s been held for me.

“So, I regained a lot of my patience for other people. For ages, I was so angry at the world all of the time and then because people held the space for me to just be and be safe, I was then able to regain a lot of my calm and help other people.

“It’s sort of like that saying that ‘you can’t pour from an empty cup’. Well, I had been constantly emptying mine and then Kairos helped fill my metaphorical cup back up enough so that I could realize more of myself.”

The constant enduring message of Kairos has always been one of acceptance and equality, which Jules says is one of the things that they enjoy most about being involved with the charity.

“I think my favourite part of Kairos is this continually maintained vibe of ‘come as you are’. You don’t have to be perfect at all. If anything, we bond through our differences and our similarities. You don’t have to like the same things.  We have shared values anf want everybody to be living in a world with kindness. Everybody coming together and acting on these shared values, the Kairos values.

“I’ve become close friends with people and even cried with or shared joy with people that I would never have known otherwise, because we don’t have any shared interests other than our values.

“We’ve been able to have some really difficult conversations, disagreements and talk about some really, really hard things that quite often in other spaces, you would expect friendships to fracture over. But here, everybody has maintained this sense of love for each other through those coversations. 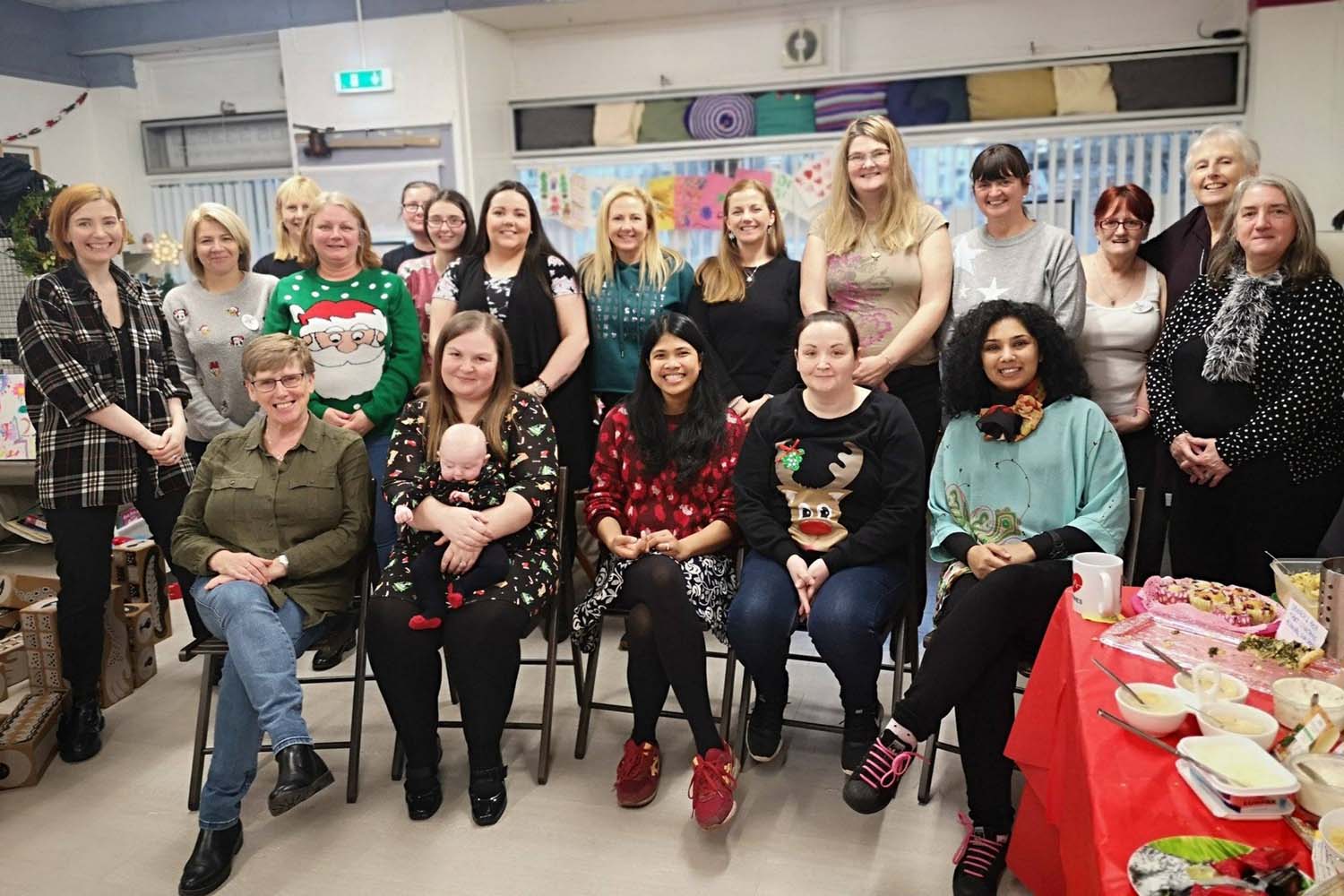 Some of Kairos’ volunteers

I’ve been a volunteer at Kairos since June 2019 when I joined after meeting Katy, Kairos’ Senior Co-ordinator at a council funding event at Johnstone town hall and she suggested I come along to an Equalities Collective meeting as I was looking to become more involved in local community projects.

After I went to that first collective meeting, I knew I’d been bit by the Kairos bug, I just really gelled with the vibe and ideologies Kairos held and since then I’ve become a volunteer and unofficial in-house journalist. I feel like I’ve found purpose in volunteering at Kairos and it has really helped me grow and find my voice when it comes to fighting for what I believe in.

It’s clear to see that we are a tight-knit community, woven together by many different women and non-binary people with the ultimate shared goal of making the world a much more inclusive, fair and equal place for women+.

Even when faced with the incredibly difficult challenge of operating during a global pandemic and national lockdown, Kairos has still continued to support and engage local women in Renfrewshire, even going as far as to gain independent charity status during these unprecedented times. If that doesn’t show you what Kairos can achieve, I don’t know what will.

Getting Back to Socialising