White Cart bridge in Paisley reopens after more than 25 years

The White Cart bridge has reopened to the public after more than 25 years and will soon form part of a new walking and cycle route from Renfrew to Paisley.

Originally a rolling lift bascule bridge built by Scottish engineer Sir William Arrol, the bridge at Abercorn Street in Paisley had been closed for more than two decades before Renfrewshire Council commissioned works earlier this year to strengthen and refurbish the structure.

Repairs included strengthening of the steelwork, coating with protective paint, new lighting, and landscaping around the entrances to the bridge on Carlile Street and Abercorn Street – with the works carried out by W.I. & A. Gilbert Ltd and overseen by Sweco UK Ltd.

The bridge will form a key part of the Renfrew to Paisley cycle route, planned for construction in 2022, as well as complementing the Clyde Waterfront and Renfrew Riverside project and Glasgow Airport Cycle Route.

The refurbishment of the bridge also precedes £38million of investment from the Levelling Up Fund for the area, which includes a new road bridge over the White Cart, an east-west road linking Renfrew Road and Love Street, and enhance links with Paisley town centre, Glasgow Airport and the Advanced Manufacturing Innovation District Scotland.

Depute Provost Cathy McEwan cut the ribbon to officially re-open the bridge and is looking forward to seeing it being used by the local community.

Councillor McEwan said: “I’m delighted that this bridge has been brought back into use for the community as it gives people a new option for crossing the river on foot or by bike.

“It’s been out of commission for far too long and credit must go to the team for completing the project to restore it.

“We want to encourage people to use active travel methods wherever possible as we seek to reduce emissions, tackle climate change and encourage healthier lifestyles. 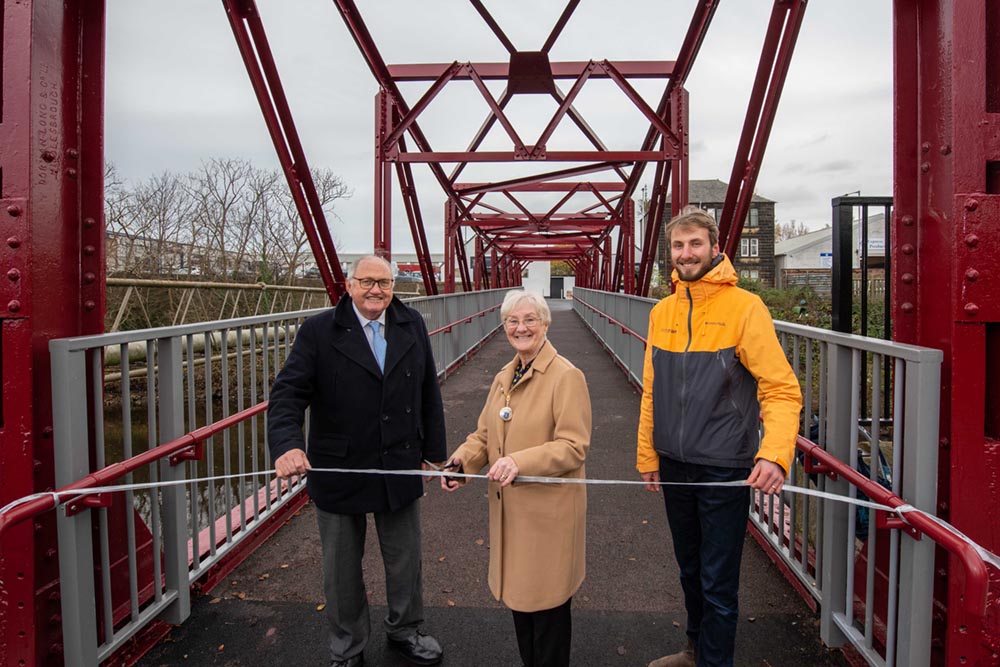 “We know we need to provide the infrastructure to support people to do this and this bridge will be part of a new cycle route connecting the town centres of Renfrew and Paisley set to be built next year – one of many active travel projects that the Council is taking forward for the benefit of people in Renfrewshire.”

Sustrans Scotland part funded the project as they aim to make it easier for people to walk, wheel and cycle as part of their vision to create a society where the way we travel creates healthier places and happier lives for everyone.

Tim Aeberli, Infrastructure Coordinator for Sustrans Scotland, said: “We are delighted to see the reopening of the White Cart Footbridge to the public after three years of planning and construction works.

“Places for Everyone has worked in collaboration with Renfrewshire Council and Sweco to provide a new strategic walking, cycling and wheeling link over the White Cart river.

The project was jointly funded by SPT as part of their support for active travel.

SPT Vice Chair Councillor David Wilson said: “SPT is pleased to have been able to give funding support to Renfrewshire Council for the refurbishment of the White Cart Footbridge.

“Having been closed for many years, we are delighted to see the bridge now brought back into use, and we recognise the benefits the reopening will bring for wheeling, walking and cycling trips linking local and wider communities.”

Innovation district AMIDS on course for jobs in Renfrewshire