Young people and community groups in Renfrewshire have been getting crafty in sharing their hopes for a brighter, more sustainable future as part of a special Paisley Halloween installation.

Their inspiring artworks and messages will feature on a spectacular spacecraft, Earthship1, which will be one of the major displays at Paisley Halloween Festival presents Out of this World from Thursday 28 October – Monday 1 November.

The installation, created by artist Mick Stephenson, will focus on issues around sustainability with components used to create the piece sourced from reclaimed materials.

Over 150 people taking part in the workshops were asked the question: ‘What are your hopes for the future of the planet?’ The groups then expressed their wishes in the form of colourful dioramas – a 3D scene created in shoe boxes – which will go on display as part of the spacecraft’s cargo.

The cargo is inspired by the twin Voyager 1 and 2 spacecrafts launched by NASA into space in 1977, which contained sounds and images that portrayed messages about life on Earth to extra-terrestrials. 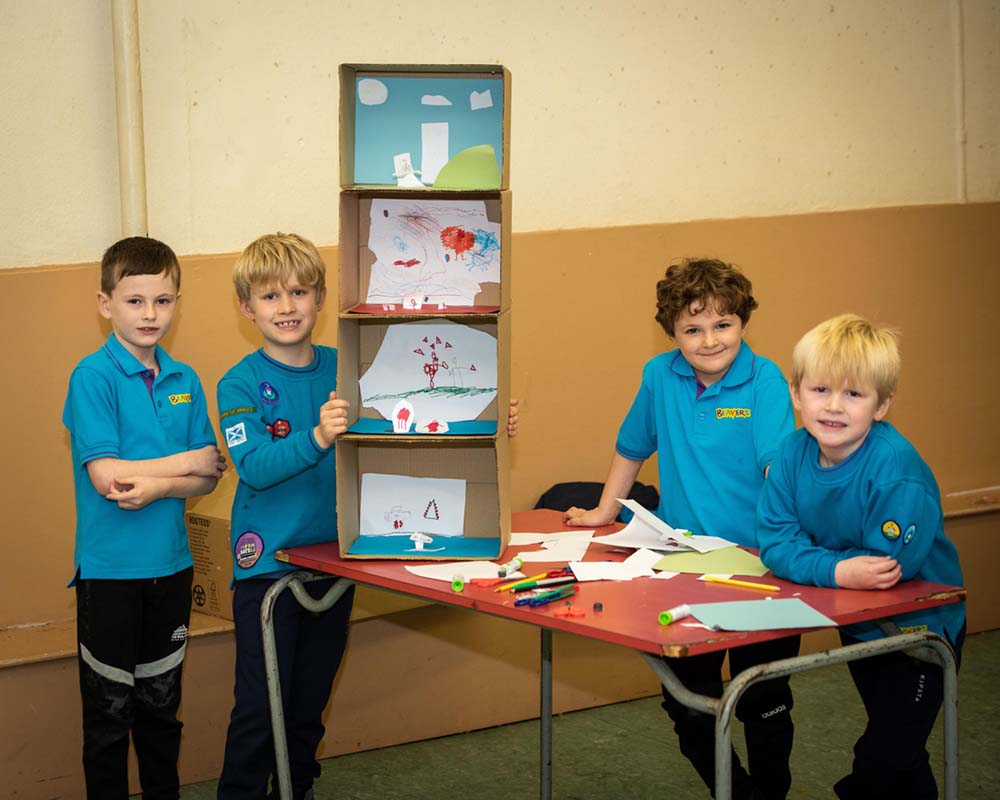 Young people from Kibble School, Our Lady of Peace and Lochwinnoch primary schools, community groups Renfrewshire Youth Voice and Renfrewshire Youth Services, volunteers from Renfrewshire’s award-winning Team Up to Clean Up campaign, 33rd Gleniffer Scout Group and 21st Paisley St Mirin’s Scout Group Cubs and Beavers are among those to have contributed to the festival.

The workshops have also provided valuable learning experiences as world leaders prepare to meet in Glasgow for the COP26 climate change conference next month.

The finished spacecraft installation will be available to view on the Festival trail across the five days.

Gerry Green, 21st Paisley St Mirin’s Scout Group Leader, said: “Our Beavers and Cubs groups had a fantastic time building the dioramas and are looking forward to seeing them all together on the Earthship1. They really enjoyed the activities and being part of the installation, which they hope will raise awareness and get people working together for a brighter future.” 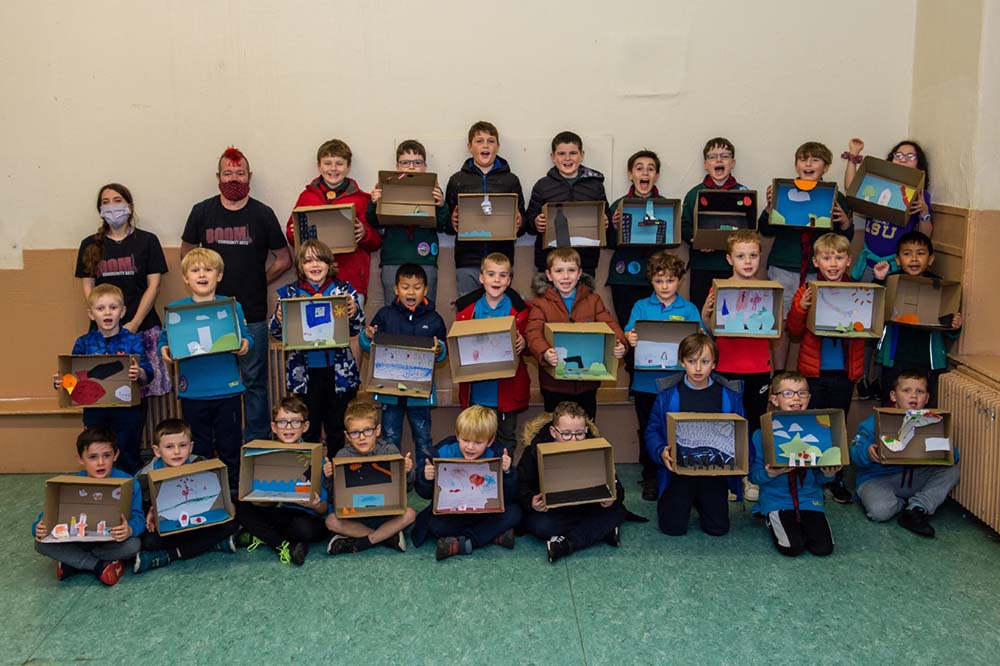 Margaret Tomlinson, Team Up to Clean Up volunteer, said: “I’ve regularly been involved in litter picks and other activities as part of Renfrewshire Council’s Team Up to Clean Up campaign and was delighted to have the opportunity to take part in the creative workshops for this year’s Paisley Halloween festivities.

“The workshops have given me the chance to express my hopes for our planet’s future and I hope all of the artworks will help to raise awareness on sustainability and climate change. I can’t wait to see the final installation.”

The Festival has also teamed up with Zero Waste Scotland and Love Food Hate Waste to provide tips to enjoy a green Halloween, including costume-making tips, delicious recipes and great ways to reduce waste – and are available to view on the Paisley.is website.

The Paisley Halloween Festival presents Out of this World trail is being delivered by Renfrewshire Council and curated by sustainable, not-for-profit street theatre specialists, Cirque Bijou. 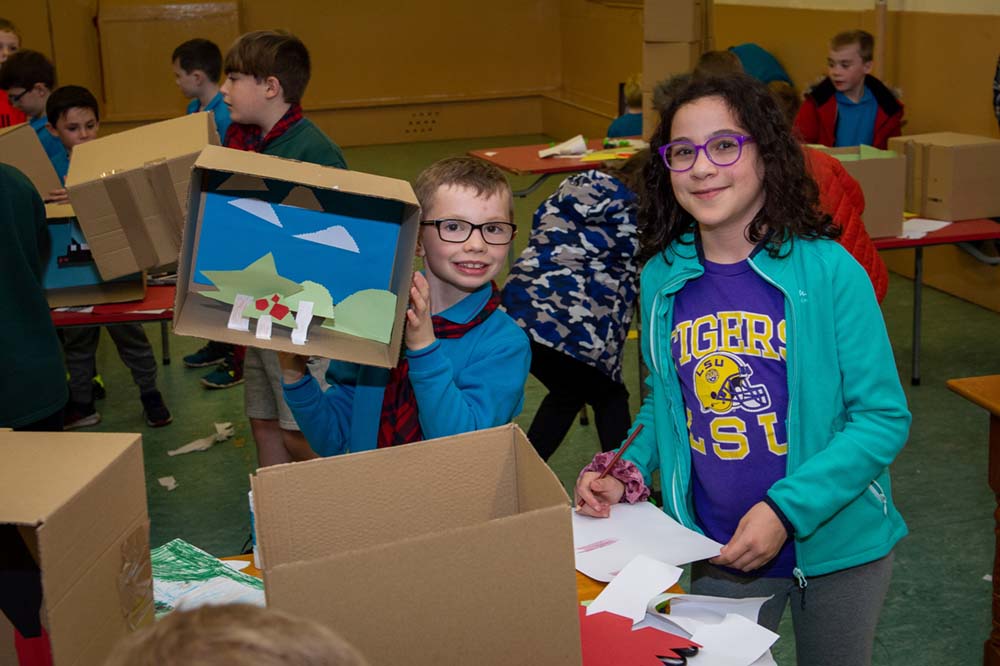 Julian Bracey, Artistic Director at Cirque Bijou, said: “We’ve thoroughly enjoyed working with local community groups and young people across Renfrewshire to get them involved in the creative process alongside professional artists at this year’s Out of this World Halloween celebrations in Paisley.

“It’s been fascinating to hear the hopes and dreams young people have for the future of the planet, with themes such as being kind and working together to deal with issues like climate change expressed throughout the workshops.

“Their stunning artworks and messages of hope will take pride of place as part of the Earthship1 installation – and we can’t wait to show you this and more spectacular sights on the intergalactic trail!”

Paisley Halloween Festival is supported by EventScotland through Scotland’s Year of Coasts and Waters 20/21 and Scotland’s Events Recovery Fund. 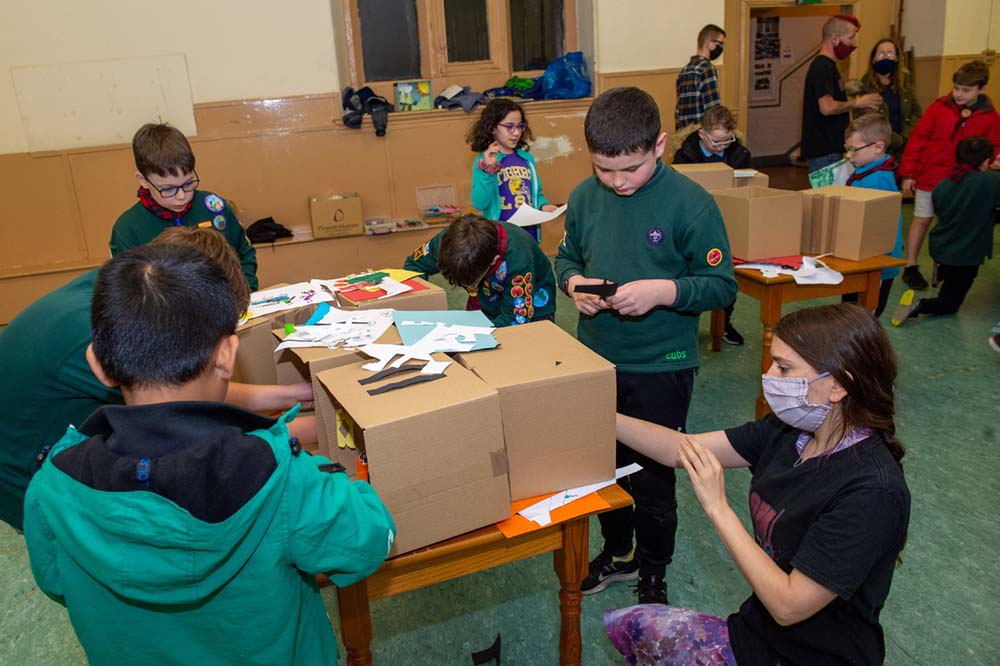 Earthship1 is one of 12 spectacular installations and light displays that visitors will be able to see at Paisley Halloween Festival presents Out of this World, with the area around the White Cart river transformed for the “otherworldly” experience as part of the Year of Coasts and Waters 20/21 celebrations. The event is designed to shine a spotlight on Paisley’s White Cart River and bring locals and visitors closer to the water.

Stunning artworks by young people at Kibble School will be among the light displays projected onto the riverbank for people to marvel at, while community groups have also been working with esteemed artists and Cirque Bijou to create colourful lanterns which will be placed around the thrilling trail.

Paisley Halloween Festival presents Out of this World takes place from Thursday 28 October – Monday 1 November, with the trail illuminated from 5pm-10pm for visitors to enjoy safely at a time that suits them.

The award-winning festival is widely regarded as one of the best events of its kind in the UK.