Mill Magazine talks to artists Rachel Lowther and Kerry Stewart about making the Glen Cinema memorial and the creative process behind it.

You were awarded the Glen Cinema Memorial Commission in December 2019, where did the research for the project take you?

It started with us visiting survivors, Robert Pope and Emily Brown and meeting their close families, as well as being moved by the gravestones in Hawkhead cemetery — one gravestone in particular gives a child’s age in years and months.

A major part of our commission involved talking to people in Paisley about what would make for a meaningful monument for the town. The disaster was so profound and extreme that it has affected many generations of families in Paisley and further afield for many years, so a lot of our research involved talking to different members of the community.

Despite the pandemic, we managed to engage with a wide range of people. In addition to talking to two of the survivors, we ran workshops with Paisley Grammar School, The STAR Project and the steering group for the memorial.

For these workshops, we researched and showed examples of art from around the world that deals with loss and trauma. Examples of these include Rachel Whiteread’s Holocaust Memorial in Judenplatz in Vienna, Jonas Dahlberg’s proposal for the Utoya monument in Norway and the murals that centre around the death of George Floyd. The conversations that sprang from seeing this art helped open discussion about what might be possible and desirable in Paisley. 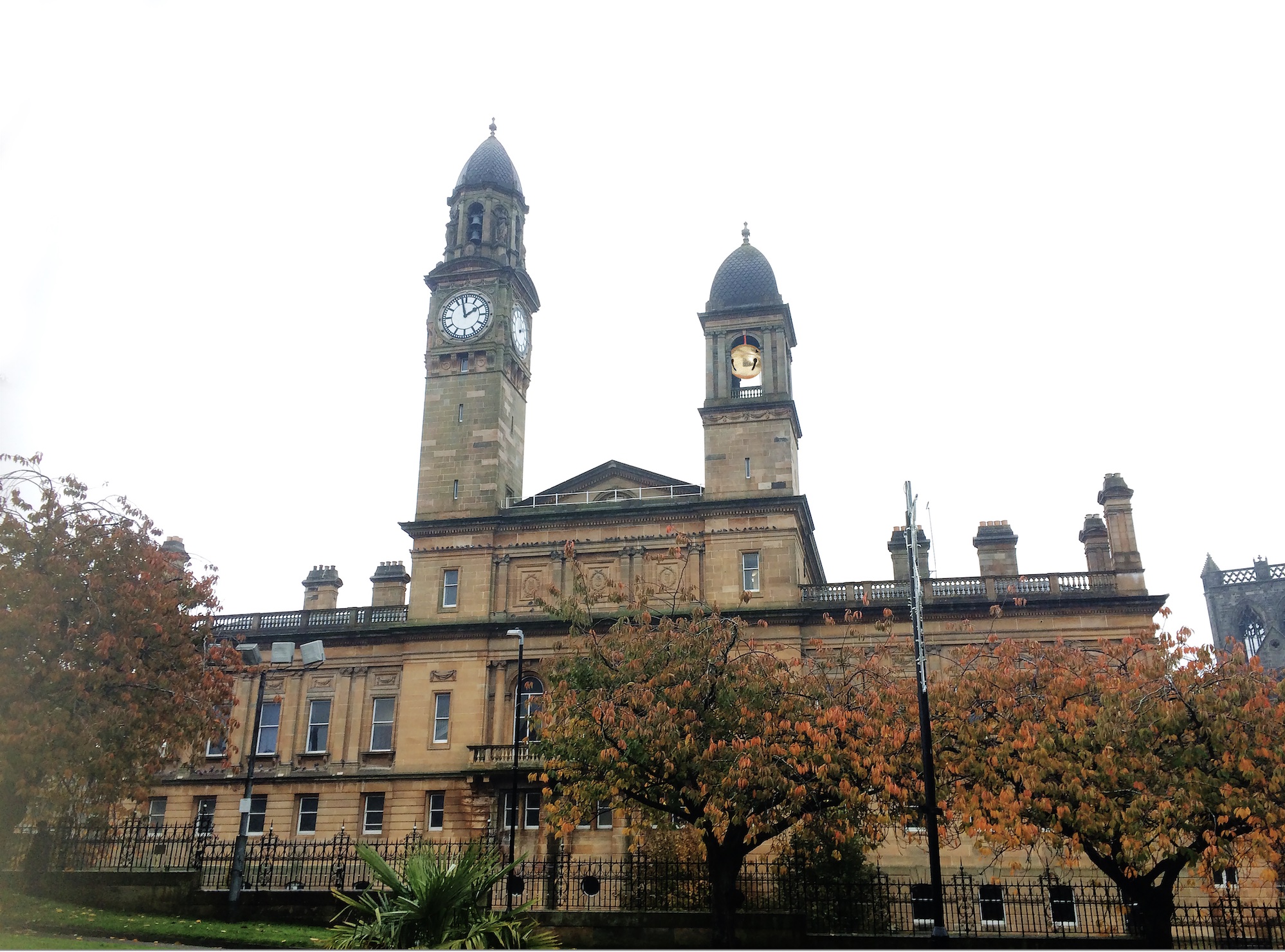 We watched Paul Mothersole’s powerful documentary film about the disaster in which survivors tell harrowing stories of what unfolded that day. We attended the 90th anniversary service at the Abbey in 2019. We read painful letters in the Secret Collection from parents of children involved in the tragedy, such as a 3 year old suffering from shock, who would wake up screaming at night and who slept all day.

Parents, who were grateful their children survived, couldn’t afford to replace their children’s torn coats and stockings and lost shoes.We read original news articles and the 1930 report into the disaster at the Heritage Centre.

However, our work also took us to some unexpected places. We climbed the narrow winding staircase of the Paisley Town Hall bell tower, which was apparently a late addition to the building to obscure the town hall clock and prevent factory workers leaving their work to check the time from their windows.

We discovered an uncannily similar disaster happened in Calumet, Michigan on Christmas Eve 1913 in which 73 (mostly children) died and which is immortalised in Woody Guthrie’s song “The 1913 Massacre”.

We are still discovering more. There is at least one other survivor who, like so many, cannot speak about that day. The effects on the lives of the survivors and rescuers has never been addressed, but will have been vast, complex and varied.

We are learning about Isa Muir, the 15 year old “cinema chocolate girl” who saved some children and gave crucial evidence during the court case. The pressures on her and sense of responsibility must have been immense.

How important was the input from the children/young people from Paisley Grammar?

We felt it was crucial that children gave their input and only wished we could have met with a primary school too. The teenagers were really excited when we showed them an excerpt of a film about the disaster that showed old footage of children waiting to go into the Glen and modern day footage of Robert Pope talking about his experience at the same location decades later.

Recognising their own town on film really brought the story to life for them and helped them engage imaginatively with the past. Several had heard of the story through family members and discussed the events with one another.

We presented them with six potential ideas at that point and they were really keen to get involved which would have been wonderful. We liked the idea of connecting 71 of today’s children of Paisley to those from 1929 to show the scale of the tragedy and to help the story live on, but the pandemic prevented several ideas moving forward.

They came up with some wonderful ideas for sculptures connected to loss, such as a memorial for lost innocence or the shoes and bags of the Glen Cinema children. 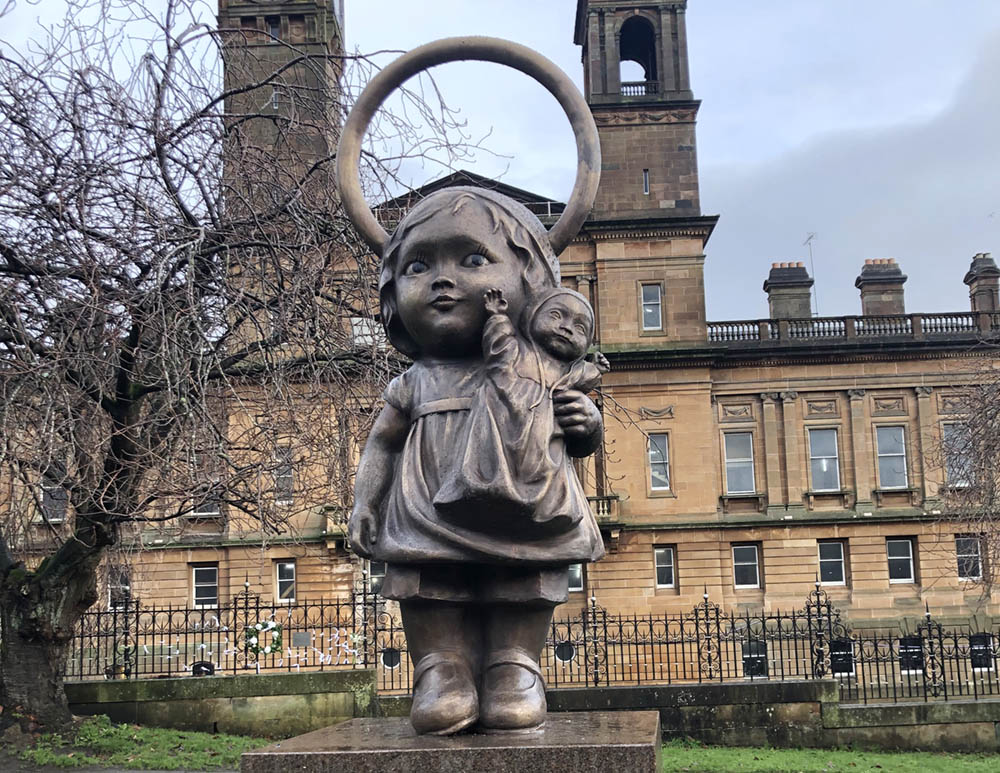 As previously mentioned, you met up with Emily Brown and Robert Pope, what was that like?

We are incredibly grateful for meeting Emily Brown and Robert Pope — their humour, openness and dignity will stay with us, along with their stories. Emily described how her older sister, Jean (10) had managed to hang onto her little sister, May (3) throughout their ordeal and all three were photographed by the newspaper.

Emily’s righteous anger got her into trouble with her mother for saying to the newspaper man who interviewed her and her sisters, “I want my biddy penny back”.

Robert‘s son had never even heard of the disaster until well into adulthood. We found that this was common. Robert told us that he, like most children involved, had never attended the mass funerals and was from a “seen but not heard” generation.

Blocking out the disaster worked for him, from being rooted to his seat in the cinema as the horror unfolded around him, to putting the past behind him and moving on with life. He still remembers the advice he was given on his very first day of school: “be good to your guardian angel and she’ll be good to you”. Having been spared at the age of seven, he still prays every day. 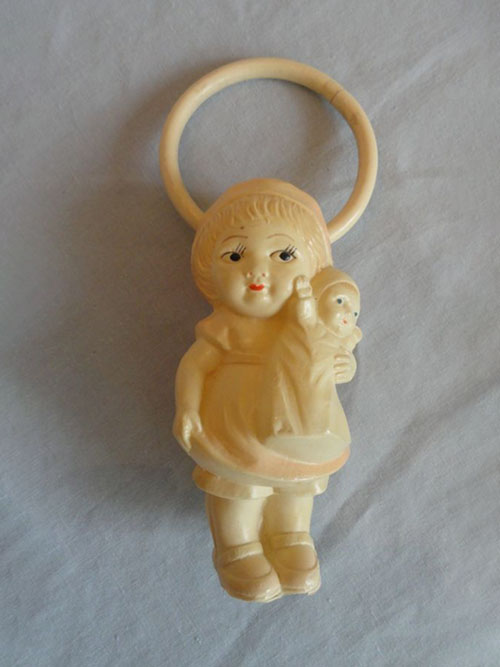 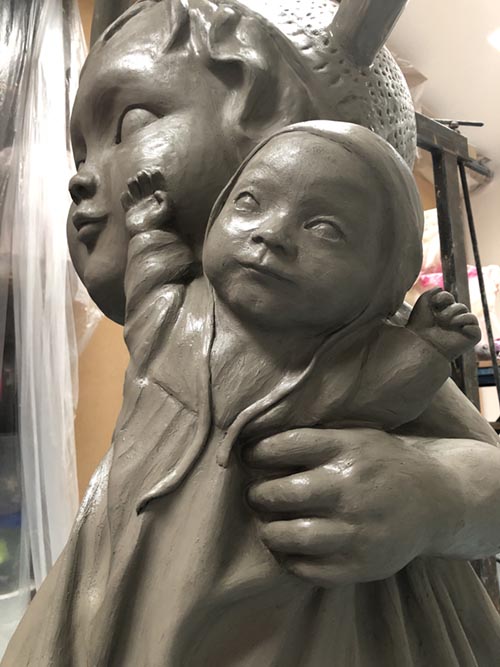 Tell us about the final sculpture, Rattle/Little Mother…

The sculpture is based on a celluloid rattle from the 1920s or 30s. It stands on a stone base depicting rays of sunshine taken from the original Glen Cinema sign, and engraved with the names of all 71 children who died.

It was very important to us that the final artwork be playful and uplifting. We were looking for an object that could act as a portal to the children of the era. The little rattle with its curiously placed handle spoke to us.

It spoke of the children and their innocence and playfulness; of their little hands and pockets containing random oddments they might have dropped; it pointed to the celluloid film canister that caused the tragedy; it told Emily Brown’s story and those of the older children trying to cling to their younger siblings (there were many tiny children there that day); and above all it carried a sense of the sacred.

From reporting done at the time of the disaster John McDowell, aged 9, was quoted as saying, “I could hear little girls shouting that they had lost their babies”. We have tried to create an object that hovers between a nostalgic lost toy and a sacred or devotional object carrying the story of the children as their own protectors.

The Glen Cinema Disaster is such a tragic event, what impact did undertaking this sort of project have on both of you?

It is impossible not to be shocked and moved by what happened in the Glen Cinema. The scale seems too vast to comprehend. From a silent film screening to the town’s stunned silence, no bells rang in the new year of 1930.

Classes and families were suddenly missing children. The pain that engulfed Paisley and the gaping hole at its heart was probably too great to express. For many of those directly affected, it remained that way. There are many people in Paisley who will say their parents or grandparents would not speak of it – just as you hear from soldiers returning from the world wars.

As Robert Pope told us, in those days there was no support for people like there is today. It is terribly sad to think of those who silently carried the trauma of that day with them their whole lives. Having focused on this project for two years, we feel a sense of connection to the tragedy and are continuing to research it.

We would love to hear from anyone who has a story to tell connected to the Glen Cinema disaster, however small or incomplete it might seem. We are hoping to create a book about it. 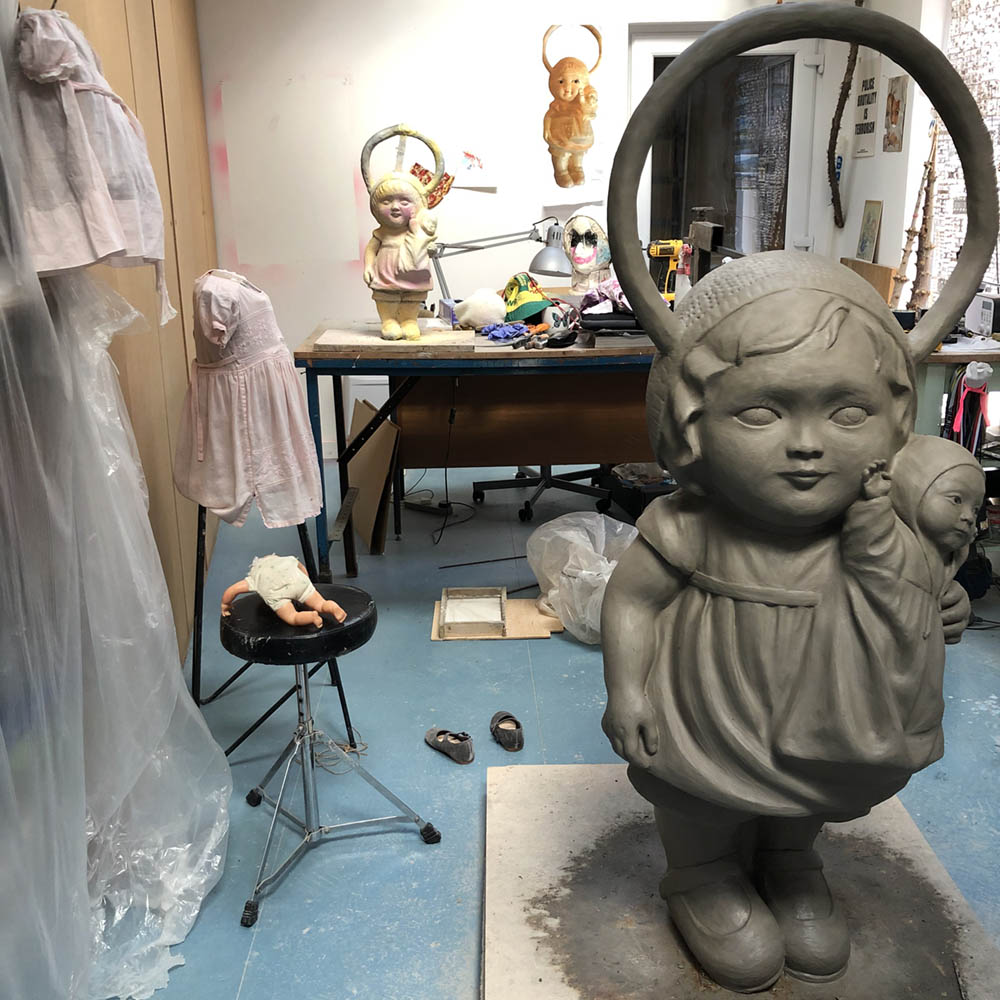 The memorial in progress

How important is it for Paisley to have this new memorial in its town centre?

While the monument was being installed and during the unveiling and commemoration, people approached us and talked to us and amongst themselves about their relationship to the disaster.

It seems to have fulfilled the role of being a place that allows people to talk about what happened and the subsequent effect on themselves and others in Paisley. It is also vital that it places the memory of the children who died at the Glen back in the heart of Paisley.

The Glen Cinema Disaster seems as though it was shrouded in silence for many years – hopefully the memorial sculpture in the centre of the town can help change that.

GET IN TOUCH WITH THE ARTISTS:

Rachel and Kerry are planning to make a book about the Glen Cinema Disaster and would like to ask anyone who is interested in talking to them to email lowtherstewart1@gmail.com.

Innovation district AMIDS on course for jobs in Renfrewshire