How do you handle the pressure of stewarding the top six ambitions that the club has at the moment?

It was something that I spoke about with the board from the minute that I took the job, really. I think that the club has underachieved in the past, even going back to my days as a player. The top six always eluded us for one reason or another, but I felt we had a good enough group to do it.

This is my third season now and I feel that we’ve gradually made improvements on the recruitment side that have put us in a good position. Obviously, last year was the best finish in the league for a long time and we hadn’t made it to two semi-finals in one season for decades, so we want to continuously build off that. We’re not getting carried away, but we’re doing alright.

I know we live in a world now where people want instant success and can be quick to be negative, but it’s just about being realistic about where we’re at and not getting too down when things aren’t going our way or too excited when they’re going well.


On the subject of negativity, are you glad that social media wasn’t a thing you had to deal with during your career as a player?

It’s too easy for people to voice negative opinions, but it’s not something that we let bother us too much. I don’t have social media, but I know that it can impact some of the younger boys. I think their generation seems to take criticism a little more personally than we did.

It’s not like I’m going back 30 or 40 years, more like 10 or 15, but when I was playing first team football down in England, you weren’t really able to read about what people thought about you. Now, some of the things people write on these platforms can be quite nasty. Sometimes, I think the boys need to be reminded that the only opinion that really matters is mine as manager as I’m the one who picks the team.

Everyone is entitled to an opinion and I encourage that, as long as it’s constructive and done in the right way. At the end of the day, most of them are more than capable of handling that and the better we’re doing on the pitch, the nicer things people will write about them. We all want what’s best for the club but I think nowadays, certain sections of society, not just football fans, find it easier to be critical. That’s just life.

As someone who’d previously played for the team, how does it feel to see new players come to Paisley for the first time in the same way that you once did?

I think people that are new to the club are always pleasantly surprised about the facilities initially, with the training ground and this new stadium. I think they’re also taken aback by the size of support that we have.

I’d always like it to be bigger, I think Paisley is a well-populated area and we could generate more. There’s probably far too many buses going to other stadiums and we’d love to try and stop that and grab the imagination of young people in the community.

It’s something we were doing before Covid, I was spending a lot of time going to local schools, reading to kids and just trying to get the club out there. That’s ultimately what we’re always trying to do. Season tickets are up on last year and we always want to see that grow.

As someone who’s been a part of special moments in St Mirren’s history, are you always looking to provide more of them from the manager’s position?

Yeah, definitely. When I think back to the league cup-winning season in 2013, we felt a real connection between the club and the town back then. I think you could see that by the amount of people we were bringing to the semi final and the final, there must’ve been 20,000 there at Hampden.

It’s the job of myself and the board to put out better teams that’ll get better results and encourage those people to come back on a regular basis. Cup runs like that can really help bring us together but I have to say that during the lockdown period, I worked closely with the trust and we felt that was an opportunity for the football club to give back to the community and make them realise that we don’t take the support for granted. It’s not a one-way street, so we and the club delivered hundreds of meals to the local people that needed it most.

I have a close affinity with the fans and the club. Having spent five and a half years as a player and three as a manager, I’ll be due a testimonial in 18 months (laughs). They’re the ones who pay really good money to come and see their team and they want to be entertained. We all get that, nobody wants to entertain people more than myself and the club.

Where does that 2013 league cup win rank high among your personal career highlights?

It’s up there, without a doubt. From a club perspective, it’s definitely my biggest.

It happened when I was 32 when you’re getting into the latter stages of your career and you’re not really expecting another big moment, so I probably appreciated that more than any other. I’ve been very lucky for so many things to happen to a kid from County Waterford, so I’m always grateful for it.

After the game, I was burst so I didn’t even end up going into Paisley, but I know a lot of the boys did. The next day, I met them all in the town and we kicked on for a fantastic couple of days on the lash (laughs).

When you’re at a club like ours, you appreciate those moments even more. So when you do it, you need to really relish it. We’re capable of doing it again and that’s what we need to keep believing. 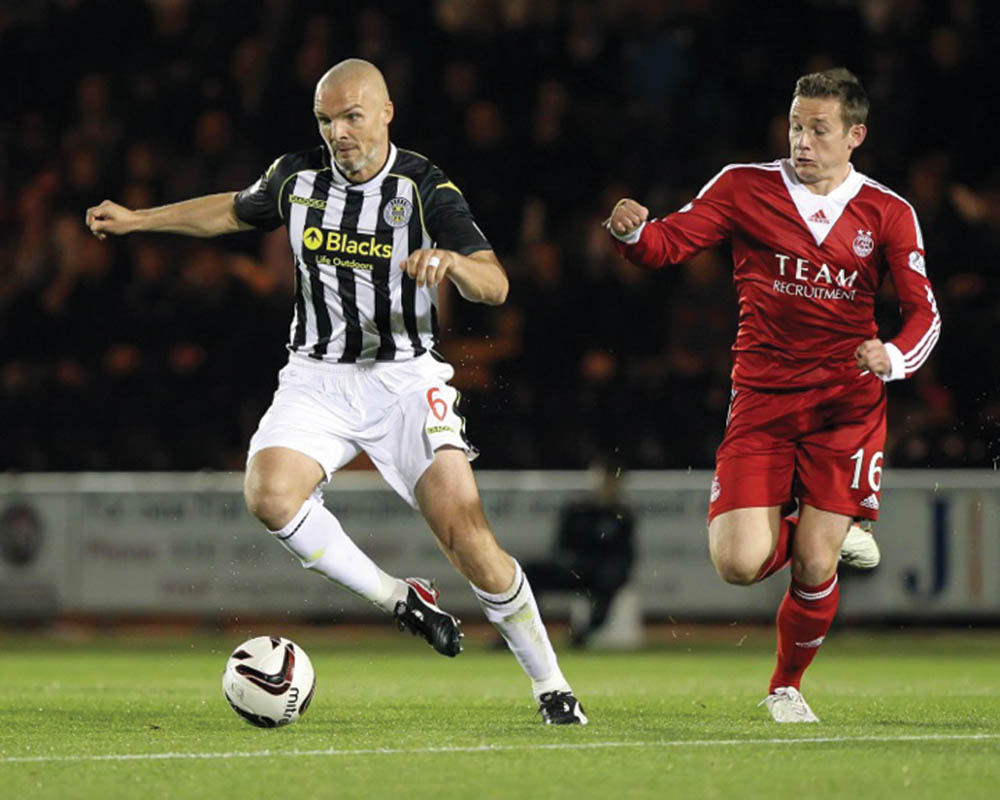 “I’ve been very lucky for so many things to happen to a kid from County Waterford, so I’m always grateful for it”

Who are some of the best players that you played with at St Mirren?

Who was the hardest player?

Darren McGregor was a monster, man. Certainly a guy that if he got a hold of you, you’d be in trouble!

Who has the worst music taste at St Mirren?

Our physio Kevin Bain is absolutely shocking. I like a bit of country music now and again, but Kevin listens to everything and anything. His clobber matches it as well. He belongs in Texas or something (laughs). He’ll go in the huff with me but I need to speak the truth.

This interview appears in the November/December 2021 issue of Mill Magazine. Keep up to date with St Mirren FC via their website.