Renfrewshire has honoured local groups and volunteers for their work in the community at the Provost’s Community Awards.

Renfrewshire’s Provost Lorraine Cameron was joined by comperè Gina McKie to help celebrate the achievements of devoted community members who go above and beyond to make Renfrewshire a better place to live and work.

The award winners were invited to a special ceremony at the Lynnhurst Hotel in Johnstone after being chosen from outstanding nominations submitted by their peers in the local community.


On the night guests were entertained by talented musicians from Gleniffer High School before the award ceremony got underway.

The recipients of this year’s awards were: 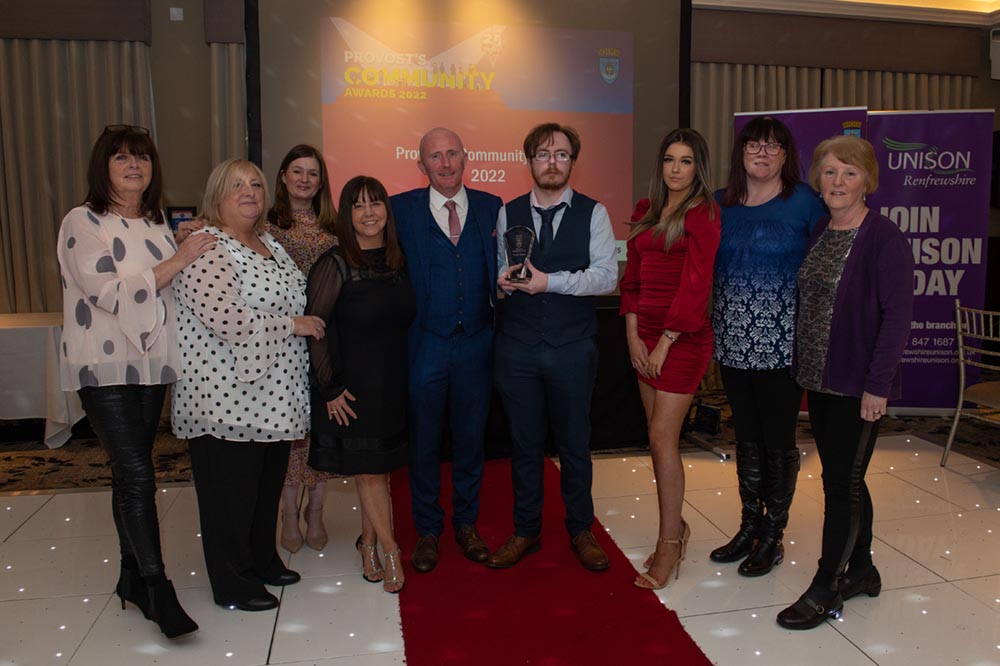 Christine worked at Renfrewshire Carers Centre for 24 years. Described by her colleagues as the heart of the centre, Christine dedicated her career to supporting carers in Renfrewshire, with a special soft spot for young and young adult carers. Christine passed away in October 2020 and is being awarded the Carer’s Award posthumously. 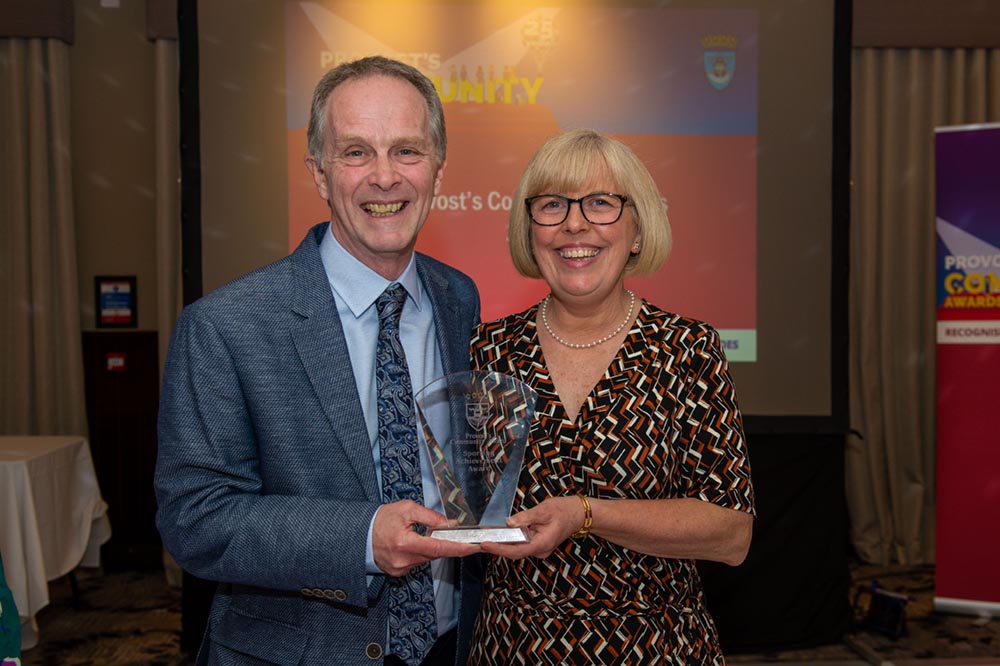 David has been the Event Director of Linwood Parkrun since its inception in 2016. David and his wife Lesley have given countless hours of their time to ensure the free and inclusive weekly 5k goes ahead safely every week – volunteering at over 260 parkruns between them. David is also a transplant recipient and has represented Great Britain at the World Transplant Games. 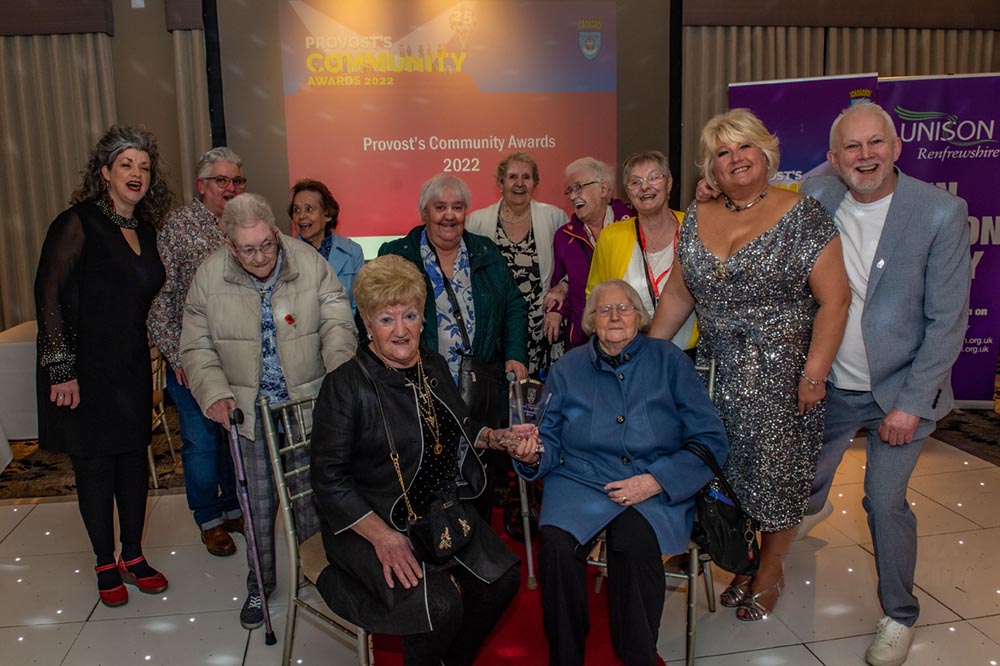 Forever Young are a group based within Renfrewshire’s sheltered housing. The group was formed to bring tenants living in sheltered housing together to organise events, activities and tackle social isolation and loneliness. Some of the activities organised by the group include speedboat trips at Castle Semple Loch, trips to the theatre, a walking group, a choir and regular arts and crafts sessions. 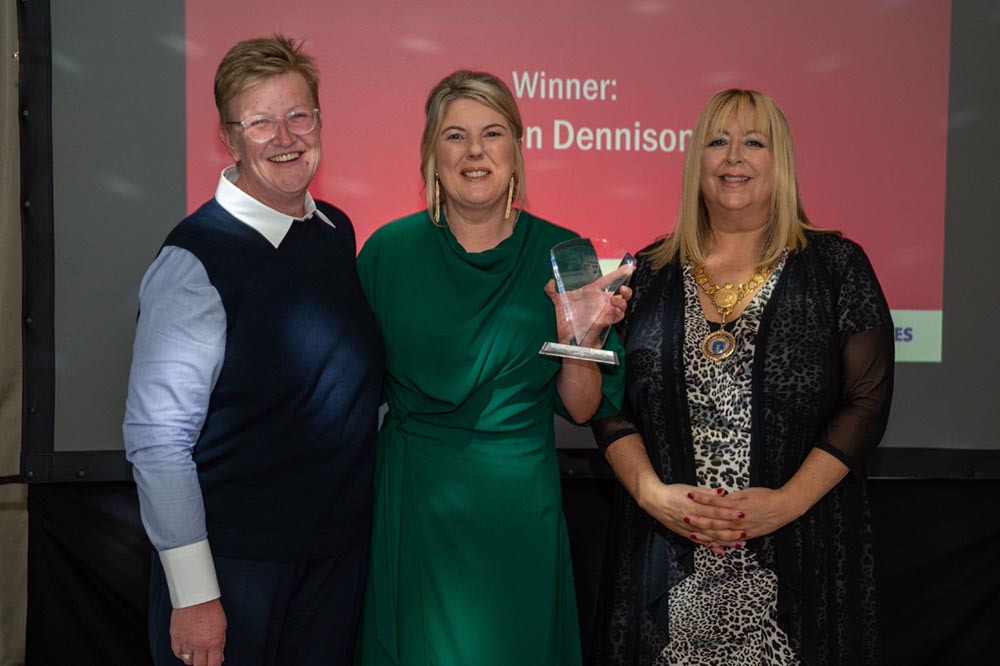 Employee of the Year (sponsored by UNISON Renfrewshire) – Sharon Dennison

Sharon is the Morrisons Community Champion at the Anchor Mill store. Sharon’s role varies day to day from organising donations for the foodbank, to just being a friendly face in the store for customers looking for a chat and a cuppa. In her two years in the role, Sharon has organised a variety of events and fundraising activities in store to support local charities and community groups. 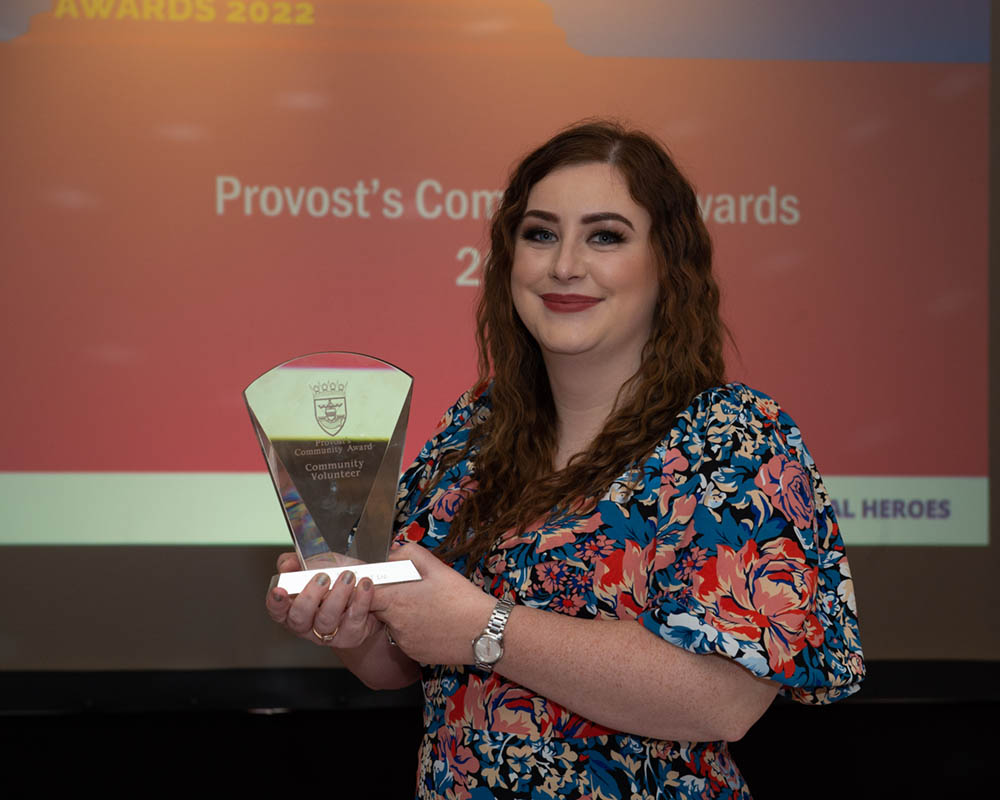 Lauren launched the Renfrewshire Toy Bank in 2018 when she collected items to donate to the toy bank, and then realised there wasn’t one. Originally just covering Christmas, the Toy Bank now also supports birthdays and other annual events like Halloween. Giving up around 40 hours of her week to the Toy Bank during the busiest periods, Lauren works with local referral agencies and other third-sector groups to identify those in need and to ensure no child in Renfrewshire goes without. 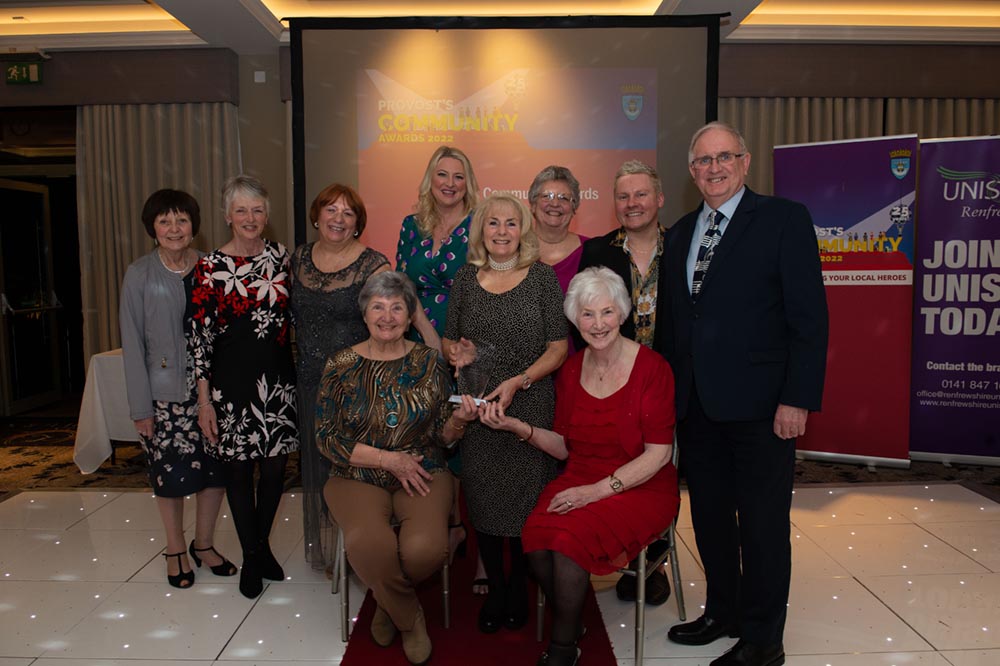 Johnstone Phoenix Theatre Group was founded in 1963 and prides itself on bringing outstanding amateur theatre and entertainment opportunities to Johnstone and the surrounding areas. Producing a spring musical and a pantomime each year, Johnstone Phoenix have a role for everyone who wants to take part – whether that’s on the stage, front of house or behind the scenes. With their rehearsal and performance venues still unavailable due to the pandemic, the members of Johnstone Phoenix have been taking part in online sessions and sing-throughs and hope to return to the stage this winter.

Renfrewshire’s Provost Lorraine Cameron said: “The Community Awards recognises those who really go the extra mile to make Renfrewshire a better place without looking for reward or recognition.

“This year was the 25th edition of the Provost’s Community Awards and it felt especially fitting to be able to host this year’s awards in person following the Covid-19 pandemic.

“These winners were all nominated by their own communities, and I’m honoured to be able to reward them for their dedication and commitment.

“Congratulations to all our winners, your hard work does not go unnoticed.”

The Provost’s Community Awards were first established in 1997 by former Provost Nancy Allison and have been continued by each subsequent Provost, recognising more than 100 deserving community members for their commitment and devotion.

For more information on the Provost’s Community Awards, visit www.renfrewshire.gov.uk/provostawards.