A new bridge over the Black Cart river next to Glasgow Airport will bring big benefits for people cycling and walking in Renfrewshire.

The new bridge was installed last week and when it opens to the public later this year, it will provide a crossing to walk or cycle when travelling between Inchinnan, Renfrew and Paisley.

The 160-tonne, 100-metre-long steel structure is one of a series of infrastructure improvements as part of the Glasgow Airport Investment Area project.

Enabling the development of Scotland’s manufacturing innovation district AMIDS, the project is jointly funded by the UK and Scottish Governments through the £1.13billion Glasgow City Region City Deal.

Walking and cycling charity Sustrans Scotland has also provided funding towards construction of the new bridge through its Places for Everyone programme.

As well as the new bridge, cyclists and pedestrians will also see the benefits of an improved junction layout at Abbotsinch Road, which is being realigned and will have shared cycling and walking facilities. 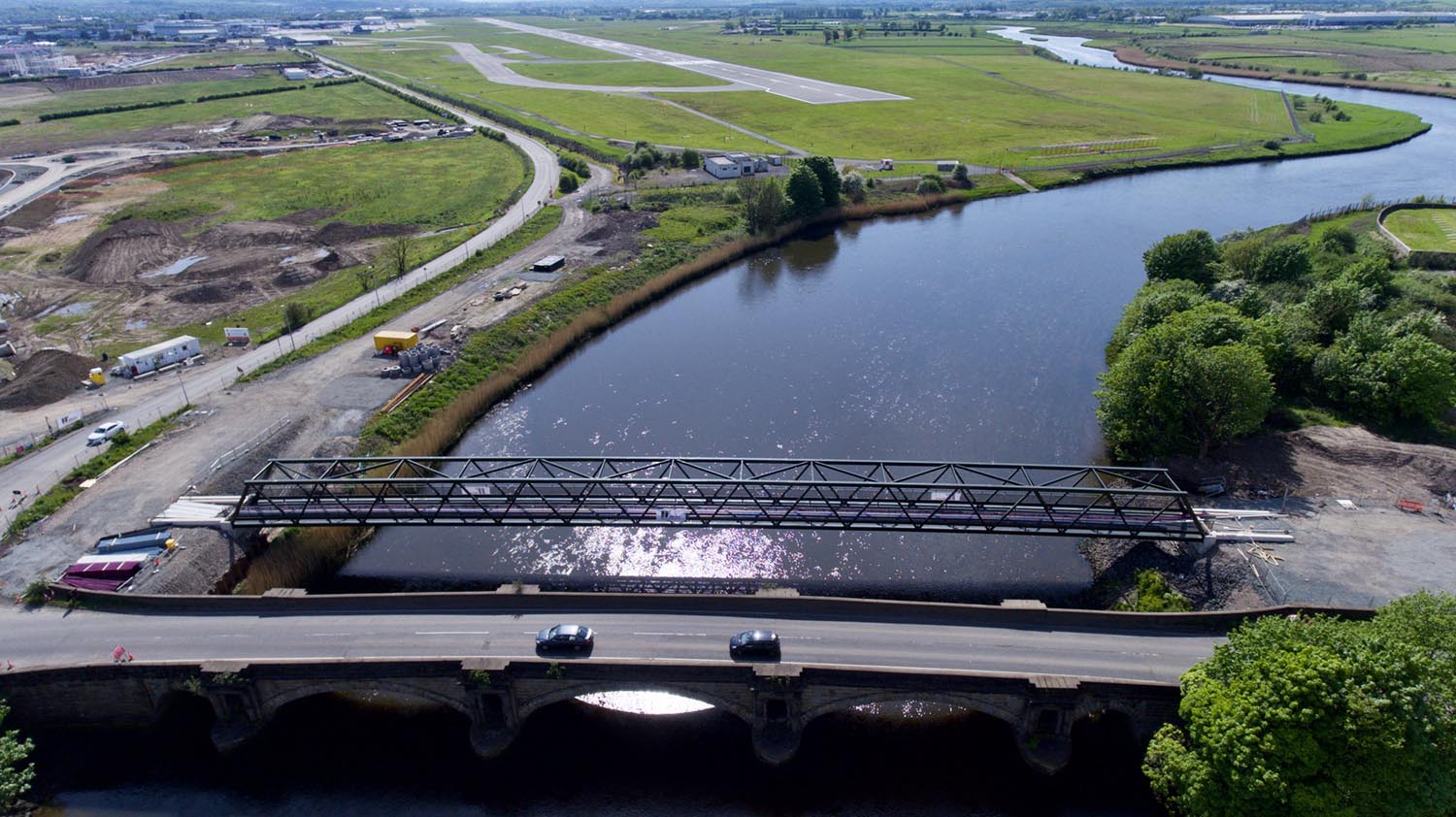 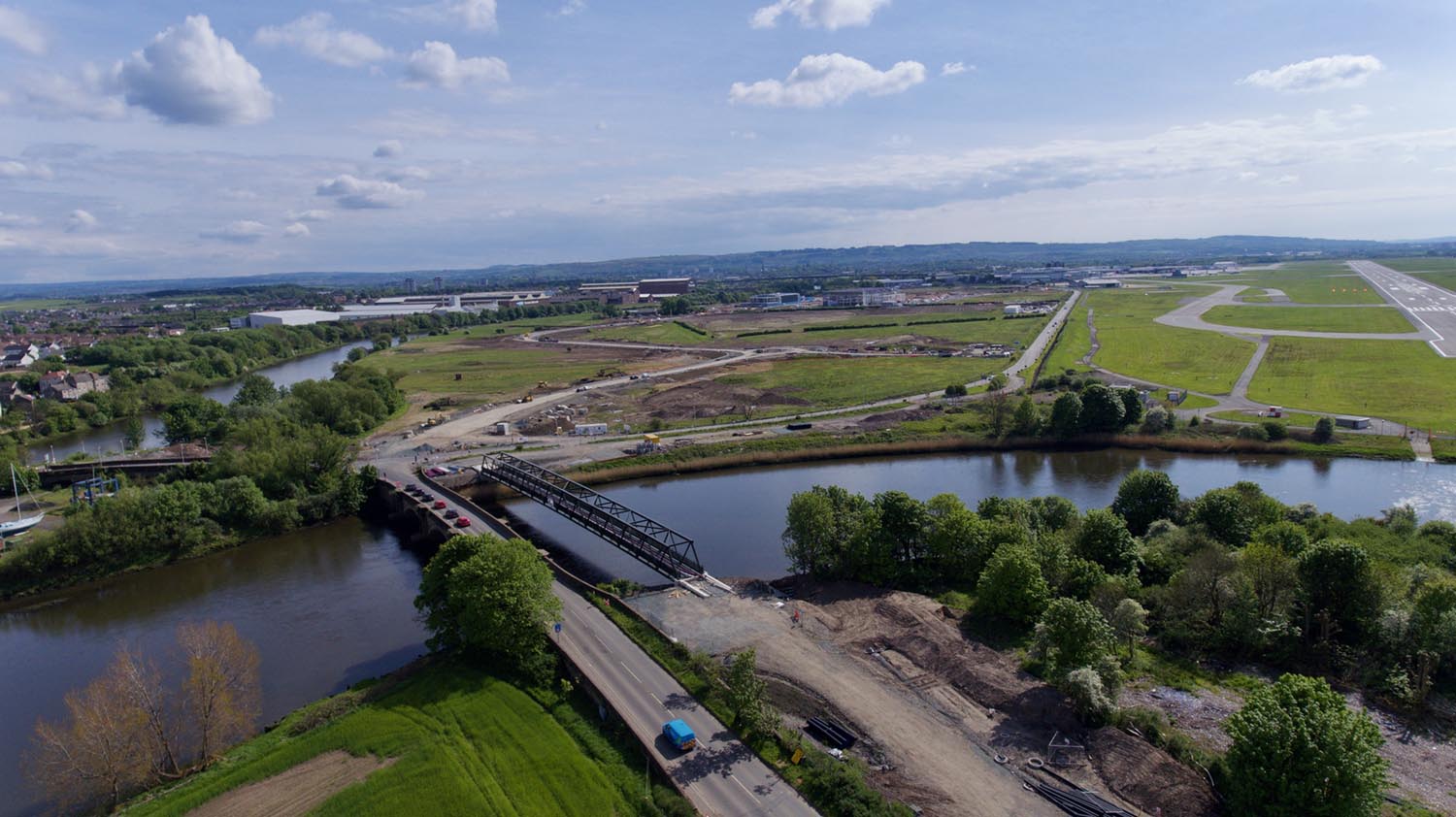 Renfrewshire Council Leader Iain Nicolson said: “We want everyone to enjoy the great outdoors and Renfrewshire already has excellent routes for people cycling and walking.

“The new bridge and all the improvements being delivered through the Glasgow Airport Investment Area project will further enhance this and encourage more people to cycle and walk, which is of course much better for our wellbeing and for the local environment.”

Wills Bros Civil Engineering are the contractors delivering the project, and are now preparing the bridge for public use, including building a permanent bridge deck and approaches to connect it into a new road layout being completed at the junction of the A8 Greenock Road, Abbotsinch Road and Inchinnan Road.

The contractor is also completing construction of a link bridge across the White Cart river, which will connect commercial traffic to the manufacturing district and enable cyclists and pedestrians to join onto a route being developed between Paisley and Renfrew.

Jonathan Wills, Director of Wills Bros Civil Engineering said: “Improved routes promoting cycling and walking is an important part of the project and the new pedestrian and cycle bridge over the Black Cart river is designed to create a safe, accessible route which we hope will prove popular over the coming years.”

Further Places for Everyone funding is supporting development of a new route from the bridge, along Greenock Road to Inchinnan Business Park, in a partnership between Renfrewshire Council, Sustrans Scotland and infrastructure specialists Amey. It is hoped this can be extended even further to connect into routes completed last year into Bishopton.

Tim Aeberli, Sustrans Scotland Infrastructure Co-ordinator, said: “The opening of this bridge over the Black Cart river will be of great value to people walking, wheeling and cycling in Renfrewshire.

“We look forward to our continued partnership with Renfrewshire Council to develop designs that will see the route extend into the village of Inchinnan and the town of Renfrew, making active travel an attractive, safe and accessible option for everyday journeys.”