The screech and scrape of metal heralds the arrival of a white and canary yellow tram, as it rears into view through the narrowest of gaps between crumbling old buildings.

This 90-year-old relic trundles towards us beneath wrought iron lanterns and balconies, a ubiquitous feature in the Moorish district of Alfama, while washing lines droop overhead between pastel-shaded apartment buildings clad in vivid azulejo ceramic tiles.

In any other city, these creaking antiques would be housed in a museum. But as one of the oldest cities in the world – predating even Rome by hundreds of years – Lisbon is not just any other city.

While resorts along the Algarve coast – with its golf courses and pristine beaches – have long been a mainstay for visitors, Portugal’s capital is the hottest ticket in Europe for a city break in the sun just now.

Standing at the Portas do Sol viewpoint, we’re lucky to be here admiring the city at all. A deadly earthquake in 1755 nearly wiped Lisbon off the map. Alfama – with its twisting labyrinths of alleyways, staircases and cobbled streets – emerged from the carnage relatively unscathed. As we look out over the river Tejo and the crest of terracotta rooftops, bell towers and white-washed buildings, you get a sense of time stopped in its tracks.

It is perhaps fitting, then, that these 1930s trams are still workhorses of the city’s public transport system, taking locals and tourists alike through the rambling, narrow streets of the city and up and down its many hills. From Portas do Sol, we battle our way through the tourists for a place on the number 28 tram for its 40-minute circuit of the city centre, shunting through one picturesque neighbourhood after another. 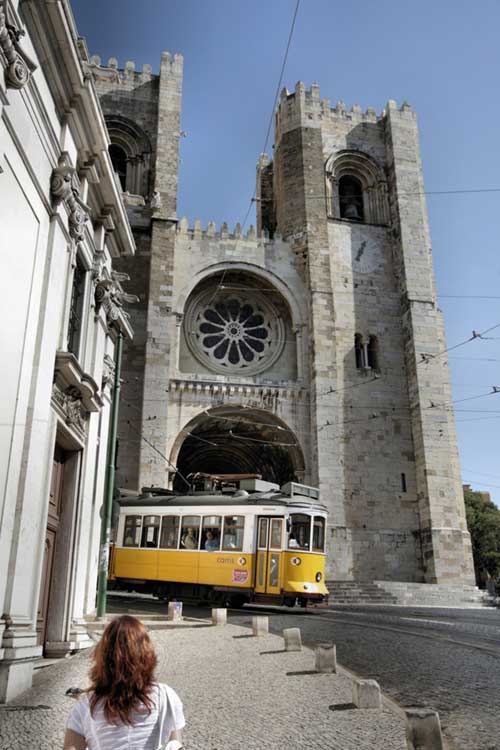 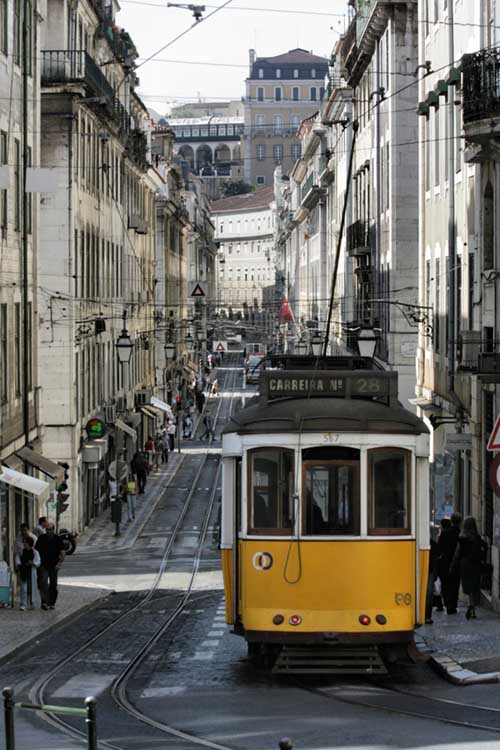 Known as “the city of seven hills,” you are never far away from a viewpoint –  or miradouro –  in Lisbon, each one affording a different perspective from which to fall for the city all over again. Most have cafés or bars if you want to linger for a sundowner as the city glows in the twilight, which we do at the Miradouro de São Pedro de Alcântara in Bairro Alto.

While it is enjoying its day in the sun just now, Lisbon has always been an important city. During the Second World War, for instance, it was a hotbed of spies and intrigue. In centuries past, it was the starting point for explorers who circumnavigated the globe in search of exotic new lands during the Age of Discovery.

In the same spirit of curiosity, we start our second and last full day by catching a tram out west to the riverside suburb of Belém. Here, Portugal’s nautical endeavours are celebrated with a monolith on the promenade dedicated to fearless 15th and 16th century seafarers such as Vasco de Gama and Magellan. Further down the promenade is the Torre de Belém. Built during this golden era, the chess piece-like tower has become an icon of Lisbon and its intrinsic connection to the sea beyond.

Belém is also where we find the best pastéis de nata in the capital. As pastelarias go, the Pasteis de Belém bakery is the definitive experience. Just one bite of the still-warm crumbly pastries with their gooey custard filling is incentive enough for us to jostle our way through the throngs of baying tourists for a table.

Its famous pastries aside, Lisbon’s culinary credentials are not to be sniffed at. There are a plethora of fine restaurants in the city, but we opt for the Time Out Market for dinner on our return from Belém. Measuring over ten thousand square feet, the indoor food court is crammed with several restaurants plating up traditional Portuguese dishes alongside international favourites.

Sated by a bowl of arroz de pato (a kind of traditional duck risotto) and a glass of Tempranillo, we leave eager to experience even more of Lisbon, an appetite that will have to go unsatisfied until our next visit. 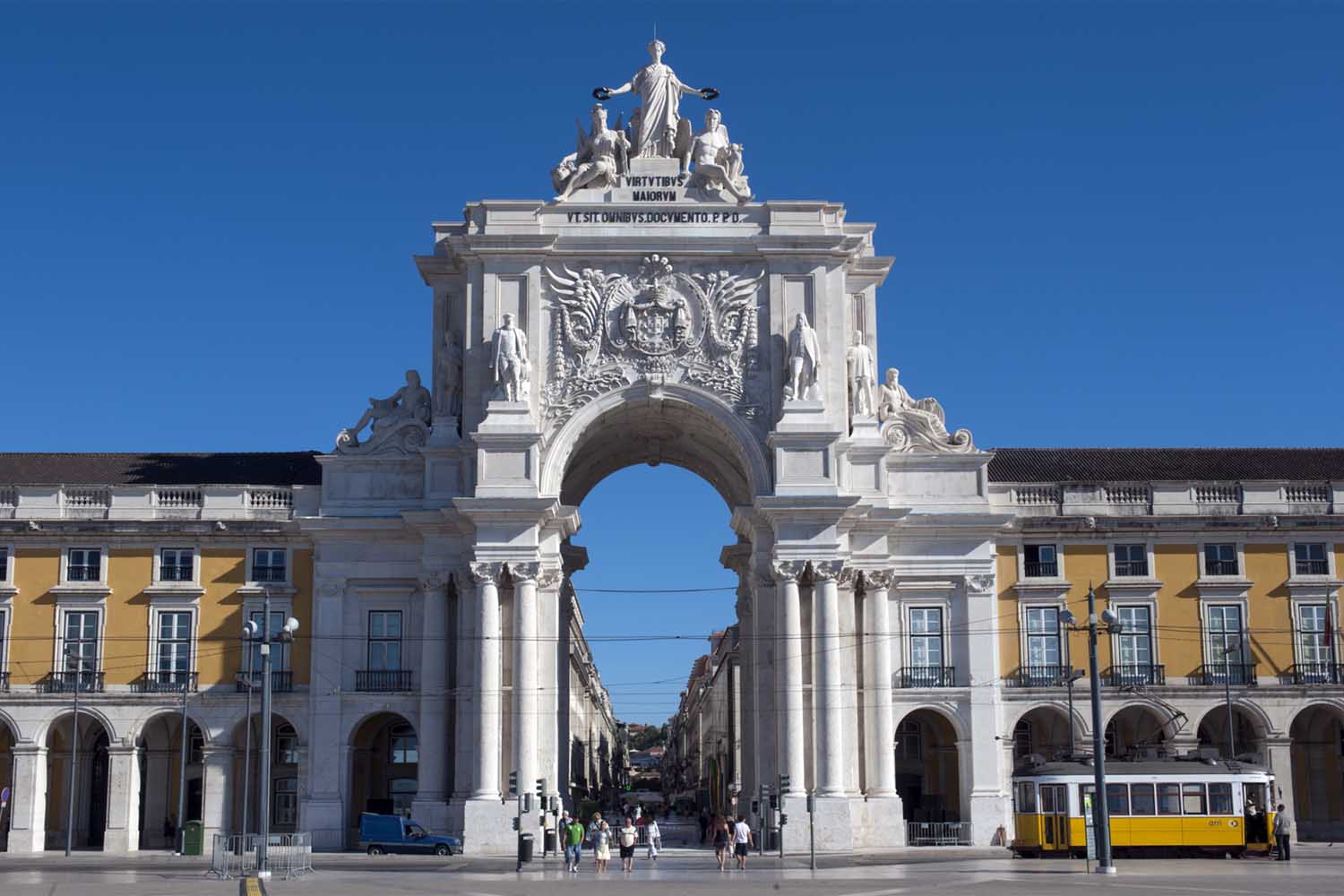 The Portuguese are very family-orientated and it really shows when travelling with children. From insisting that you cut the queue at attractions to their interactions with us in restaurants, Lisboetas made travelling with our infant daughter extremely easy. One of the only downsides are the city’s cobbles which proved too much for our pushchair. Fortunately, under-fours travel free on all public transport.

When it comes to day-to-day activities, one sure-fire hit is a visit to the Oceanário de Lisboa, Europe’s second largest aquarium. Worthy of its hype, it houses a staggering 8,000 species, including Pacific sea otters and Magellanic penguins. The impressive central tank is home to stingrays, sand tiger sharks and more.

Close to Castelo de São Jorge, Hotel Convento do Salvador (conventosalvador.pt) in Alfama is a modern hotel with artistic flair set in a renovated former convent. A standard double room from €86 a night (£76) in low season or €110 (£96) in peak season.